When YS Jaganmohan Reddy took oath as Chief Minister of Andhra Pradesh in May 2019, he promised from the dais itself that his government will release the annual recruitment calendar on January 1 every year for the convenience of unemployed and government job seekers in AP. He said AP Public Service Commission will fill these posts with clear deadlines by December 31 in the same calendar year.

Accordingly, the first annual recruitment calendar was supposed to be released on January 1, 2020.

But, Jagan’s government failed to release the calendar even after January 31.

Jagan on Friday held a meeting with senior officials of all departments to take stock of annual recruitment calendar.

However, the officials expressed helplessness to release the calendar even in February saying that most of the departments have yet to notify the vacancies.

After these vacancies are notified, they have to be submitted to finance department for approval. Later, these vacancies should be referred to APPSC to take up recruitment process like conducting recruitment exams, declaration of results, holding interviews etc.

Officials told Jagan that it will take some more time to get clarity on how many vacancies exist in various departments.

With this, Jagan has decided to hold another review meeting on February 21.

This would mean that Jagan’s government will be confined to holding only review meetings even in February.

So, unemployed and job seekers have to wait longer for APPSC to issue notifications and conduct exams.

They are losing hopes on Jagan’s promise on releasing annual recruitment calendar every year.

Jagan used to criticise previous TDP government’s failure in issuing APPSC notifications regularly due to which job seekers had no clue when a particular notification will be released and when the exams will be conducted.

Jagan promised that if YSRCP comes to power it will issue annual recruitment calendar like UPSC every year on January 1 so that job seekers will have complete clarity on notificaitions and exams and they can prepare for exams accordingly.

But Jagan failed to meet the January 1 deadline and also not in a position to tell when the annual recruitment calendar will be issued. 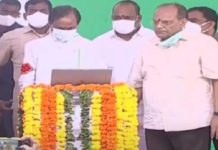 Would Nimmagadda give weightage to AP Govt stand?