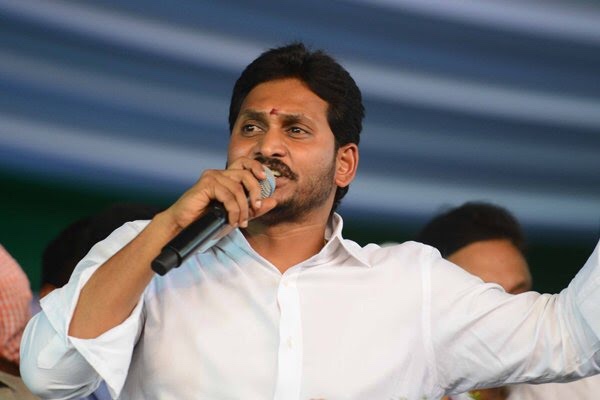 The leader of Opposition in Andhra Pradesh Assembly said this while addressing booth-level workers of the YSRCP in this temple town.

Nearly 42,000 booth-level cadres from the Chittoor district attended the first meeting titled ‘Samara Shankaravam’ aimed at gearing up cadres for the upcoming simultaneous elections to the Andhra Pradesh Assembly and the Lok Sabha.

The party claimed this was the first interaction between the leader and the party cadre on such a large scale in the state.

During the interaction, Jagan promised to increase the old-age pension to Rs 3,000 per month.

Jagan also promised that if voted to power, the YSRCP would provide financial assistance of Rs 12,500 to every farmer annually.

Jagan said booth workers need to be alert in checking the voter list and ensuring that people come to polling booths and vote, as Chief Minister Chandrababu Naidu and his men were trying to delete sympathisers of the YSRCP and enlist bogus voters.

Before addressing booth-level cadres, Jagan interacted with village-level influencers under a programme called ‘Jagan Anna Pilupu’ (Jagan Anna calling you). He shared with them his vision for Andhra Pradesh. The participants raised issues of their respective regions and suggested ways to address them.

Similar interactions will be held in all 13 districts, with influencer meets happening in the first half of the day followed by Samara Shankaravam. The next set of interactions will be held at Kadapa, Anantapur and Prakasam on Februray 7, 11 and 13, respectively. Over the course of the Samara Shankaravam, Jagan will address 5,05,120 booth-level workers from across the state.

The Indian Political Action Committee (I-PAC), the YSRCP’s campaign vehicle, has designed and implemented the two special programmes across the state.