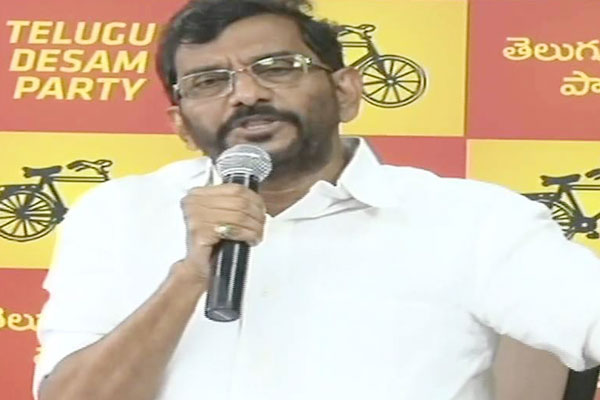 TDP is confident that the opposition YSRCP won’t be having a leader to fight the 2019 elections.

This confidence was expressed by senior TDP leader and MLC Somireddy Chandramohan Reddy in Nellore. ” I am sure Jagan will be in Jail much before the 2019 elections,” he said.

Somireddy was upset by Jagan’s comment that TDP government would not last full term and would be out of power soon. Jagan also threatened the TDP that at an appropriate time, Chandrababu Naidu’s government would be toppled. Indirectly he hinted that many MLAs were in touch with YSRCP.

Reacting on this Somireddy said jail was inescapable for Jagan and alleged that the opposition leader was responsible for all unrest in the state. “If he wants he can crosscheck his fate by consulting an astrologer. He will land in jail before 2019 elections,” he said.

Stating that Jagan was unduly ambitious to become chief minister in midterm pole, the TDP spokesperson said it would remain a day dream for him. People had already taught him a lesson for becoming too ambitious and committing misdeeds, he added and said they won’t give him another opportunity.

Referring to the Jagan’s challenge that Naidu should get reelected after dissolving the government to prove his popularity , Somireddy said, right thing for the opposition leader was that he should first test his influence among his own MLAs. ” He should ask all his MLA to resign and re-contest the elections to test his party’s popularity,” Somireddy suggested.

He alleged that Jagan was trying to foment unrest in the state by inciting people against the state government. ” But government knows how to deal with leaders like Jagan,’ he said.