Janasena chief Pawan Kalyan taking up the issue of Andhra Pradesh roads is appreciated by all irrespective of their political parties. AP CM Jagan also reviewed the condition of the roads and finally there’s a statement from government that road repair works will be taken up after October. However, Pawan pointed out the loop holes in this statement. Details as follows

It is known news that Janasena chief Pawan Kalyan has given a call to his fans to post pictures of roads of the state. There was tremendous response for this and almost 6.2 lakh people tweeted on this issue. Pawan also also asked his fans to consolidate the information related to roads so that party can fight till each and every road is repaired. YSRCP leaders initially tried to criticise Pawan on this issue but as they understood it is backfiring, they kept quite. AP CM Jagan reviewed the condition of the roads and gave a statement that, after October, when rains stop, governments will call for tenders to repair roads.

However Pawan found fault with this statement and told if the government starts tender process in October, repair world may not complete by next January also. If the government is really concerned, they would have planned in such a way that repair works will start by October itself. But anyway, Pawan taking up this issue and his constructive politics regarding this issue are appreciated by all. 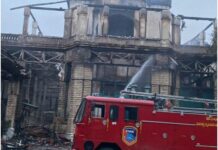 Introduction video of Rukshar Dhillon as Pasupuleti Madhavi in AVAK is...