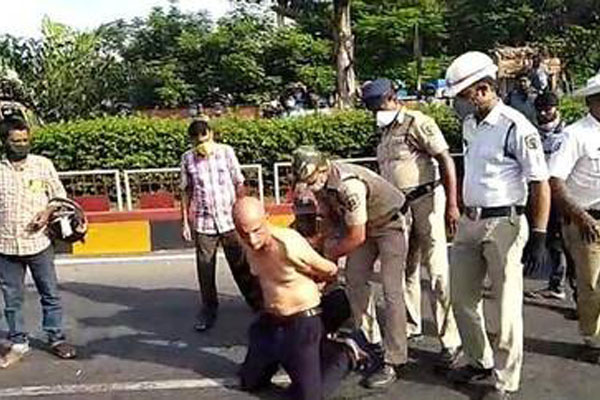 Nearly three weeks after being in confinement in the Government Mental Hospital in Vizag, Dr Sudhakar Rao finally walked to freedom thanks to the relentless fight of his 90-year-old mother Kaveri Bai who moved heaven and earth for his discharge.

On Friday at 10 pm, Dr Sudhakar Rao was discharged from the mental hospital. Accompanied by his mother and relatives, Dr Sudhakar Rao was seen wearing a face mask and driven away in a white car. When mediapersons followed the car for a quick byte, the doctor responded, “I will talk to you later.”

Dr Sudhakar Rao’s mother Kaveri Bai had fought a relentless battle against the state government and petitioned the High Court to shift her son from the Government Mental Hospital in Vizag fearing a threat to his life. Talking to mediapersons on Friday, Kaveri Bai pointed out that the state government conspired to keep her son in the mental hospital for another 15 days and hailed the HC directive to the Jagan sarkar to discharge Dr Sudhakar Rao.

On Thursday, Dr Sudhakar Rao’s 90-year-old mother filed a habeas corpus petition in the High Court demanding that the state government produce his son before the court in the next 24 hours. In the habeas corpus petition, Kaveri Bai had pointed out that her son was illegally detained in the mental hospital for more than three weeks without any valid reason. She had been running from pillar to post seeking justice and paid several visits to the mental hospital where Dr Sudhakar Roa has been languishing for the past three weeks. Dr Sudhakar Rao even wrote to the superintendent of the hospital that medicines used for treating the mentally unsound were being administered leading to severe side-effects and also petitioned the High Court through the letter.

The High Court had ordered a CBI probe into Dr Sudhakar Rao case which was criticised by YSRCP leader Aamachi Krishna Mohan who questioned the HC directive saying “Why order a CBI probe into a petty case”. Earlier, hearing a petition filed by Dr Sudhakar Rao, the High Court had asked the state government to clarify if the doctor was in the police or judicial custody. Further, the court raised serious apprehensions about the medical treatment being given to Dr Sudhakar Rao and directed the state government to ensure that the doctor gets best treatment.

It may be recalled that Dr Sudhakar Rao, who was working as civil surgeon in Narsipatnam government hospital, was suspended by the state government for raising voice of dissent over shortage of medical equipment in government hospitals. The Andhra Pradesh police had arrested him by tying a rope to his hands, dragged him on the streets and was beaten. Further, the AP police foisted false cases against Dr Sudhakar Rao under Sections 353 for assault, criminal force and obstruction of a public servant from discharging duty, Section 427 of IPC for causing mischief and Section 506 for criminal intimidation. . The CBI has booked cases against the police and government officials under Sections IPC 120B, 324, 343, 379 and 506. The CBI has also booked cases against Dr Sudhakar based on the complaint by constable V Venkataramana who stated that the doctor had assaulted the police and obstructed the police personnel from discharging their duty.