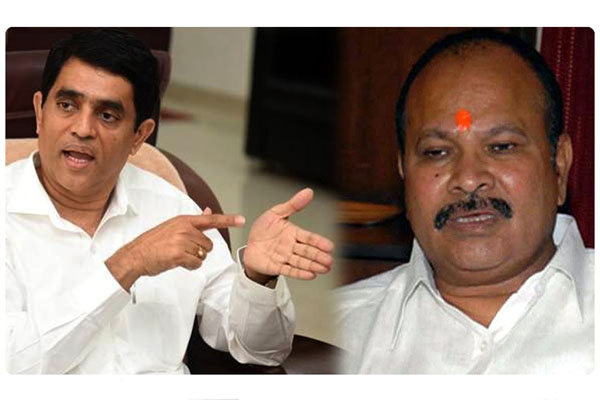 The procurement of rapid test kits by the Andhra Pradesh government from South Korea at a cost higher than other states has now turned into a full blown war of words between BJP state president Kanna Laxminarayana and finance minister Buganna Rajendranath Reddy.

After BJP State president Kanna Lakshminarayana demanded a thorough probe into the procurement of covid rapid test kits from a South Korean company accusing the state government of causing a substantial loss to the exchequer, Buganna Rajedranath on Friday reacted sharply challenging the BJP state president to prove that the company in which he is the director was involved in the procurement of the kits.

“I am ready to resign as the finance minister post by 9 am if Kanna Lakshminarayana can prove that I hold the post of a director in the company that procured the kits. If you cannot prove your allegations by 9 am tommorrow, will you resign,” Buganna challenged.

On Saturday, Kanna lashed out at Buganna saying nowhere did he mention his name or the company which was invovled in the procurement of the rapid test kits. “It is like when someone shouts theif, thief, someone who thinks he is not invovled reacts and shrug his shoulders ‘I am not the one who stole the pumpkins.” “Gummadi kaya donga evarante bhujam tadumukunnattu,” Kanna said. Further, he asked Buganna to read the letter that he had written to the Governor and get back to him if he mentioned his name or the name of the company that procured the kits.

While questioning why the state government procured each kit for ₹730 plus GST when the Chhattisgarh government purchased the same kits from a South Korean company at ₹337 plus GST, Kanna pointed out that the government involved middlemen in the public procurement process. He wrote a letter to Governor Bishwabhushan Harichandan recently and questioned what prevented the government from directly dealing with the South Korean firm which was having a unit set up in Haryana and when Andhra Pradesh could manufacture the kits on its own. Reacting to this, Rajendranath Reddy asked whether Kanna would resign if he fails to prove the accusations he had levelled. The state finance minister said Kanna was making cheap comments at a time when the government is fighting the battle against covid-19. “It is not fair on the part of Kanna to make such comments. It is unbecoming of leader of his age and his position,” he fired at Kanna.

In the past, Kanna demanded that the government should come clean on the conflicting versions on the pricing of the testing kits. The government showed that the cost of each kit was Rs 730 plus GST while the health ministry stated that each kit was procured at Rs 640. The YSRCP mouthpiece Sakshi newspaper in its April 9 report stated that each kit cost Rs 1,200. As a matter of fact, the Sakshi newspaper reported that the kits were being exported to other countries from MedTech Zone. The Chhattisgarh government had procured each kit for Rs 337. “Which one of this is true? Why there are so many conflicting versions on the cost of each kit. The government should come clean on this. When I tweeted on this issue, Vijayasai Reddy leveled serious allegations against me,” he pointed out.

In the past, YSRCP MP Vijaysai Reddy launched a broadside against Kanna accusing him of dancing to the tunes of TDP Chandrababu Naidu and that the BJP leader was making allegations against the YSRCP government without the approval of central leadership. Further, Vijayasai Reddy defamed Kanna saying “Kanna is sold to TDP for Rs 20 crore and BJP MP Sujana Chowdhury acted as a broker in the deal.” Kanna threatend to slap criminal defamation against Vijaysai Reddy. The central BJP leadership took serious objections to the sweeping allegations leveled against its party president Kanna Laxminarayana by Vijayasai Reddy.