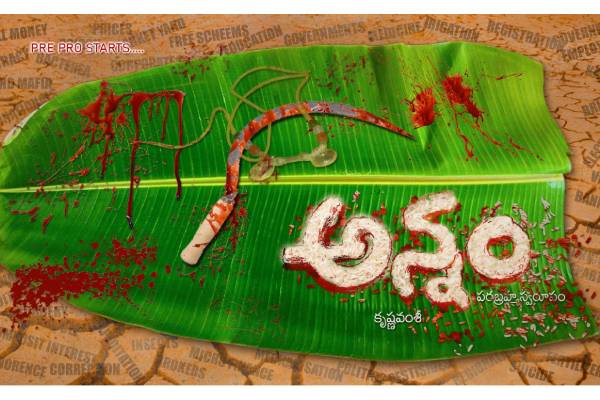 Krishna Vamsi is one of the popular Tollywood directors who enjoyed mass fan- following in 1990s. His debut film ‘Gulabi’ starring J.D. Chakravathy and Maheswari as leads has become a super hit back then.

Also, he gave many hits to the Telugu film industry like Ninne Pelladatha, Antahpuram, Murari, Khadgam, Rakhi, Chandamama, etc. But, from a few years, he doesn’t have any hits. Now, he is coming up with an interesting film.

The director, on the occasion of Maha Shivaratri, announced the title of his next film. The title and its tag line as well are quite impressive! The title of Krishna Vamsi’s next is ‘Annam’ and it comes with the tagline ‘Parabrahma Swaroopam’!

These days, we can see a lot of wastage of food while many people are not getting enough food into their mouths in daily lives. So, it is needless to say that this is the most-needed concept that any maker can choose and Krishna Vamsi has already succeeded in it! More details about the film will be revealed soon.