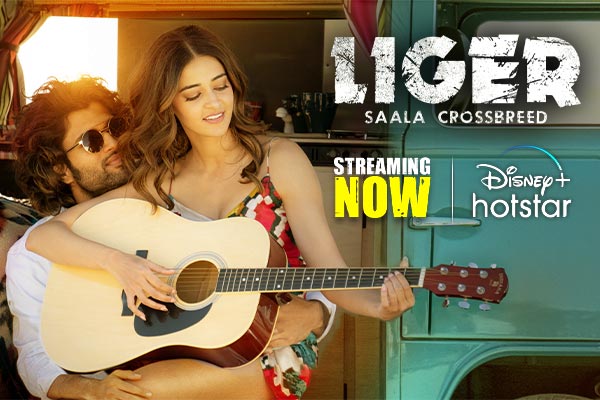 The much awaited Puri Jagannadh directorial Liger is ready to cause a sensation on Disney Plus Hotstar. The story revolves around an underdog who comes to Mumbai from Karim Nagar to pursue his mother’s dream.

Vijay as Liger, the son of a lion and tiger has been the talk of the town even before the shooting had begun. The interest intensified when the concept trailer released baring the soul of the film: MMA and a mother’s love.

Amidst numerous Pan-India movies that have been amusing the film buffs, Liger managed to garner the love of the audience. Bringing to the screens a film like Liger, Disney Plus Hotstar is leaving no stones unturned to keep the movie-lovers entertained.

Liger is all set to stream on Disney Plus Hotstar from TODAY (22nd September). The film is directed by Puri Jagannadh, an acclaimed writer-director with commercial storytelling abilities.

Liger’s highlight is the heartthrob Vijay Deverakonda’s swag and his hardwork powers throughout the film. The stunning Ananya Pandey plays the part of a cute and chic social media influencer.

Liger also features the globally famous boxer Mike Tyson. Playing the role of Liger’s mother is the veteran actress, Ramya Krishna. Her performance in the film; as a fierce and bold mother who can go to any extent to protect her son and support him has been lauded.

Liger is the story of a man so physically strong but with a vulnerable trait. Watch the film to know more about the Saala Crossbreed, Liger on Disney Plus Hotstar.

CLICK HERE!! Watch “LIGER” Movie Only On “Disney Plus HotStar”