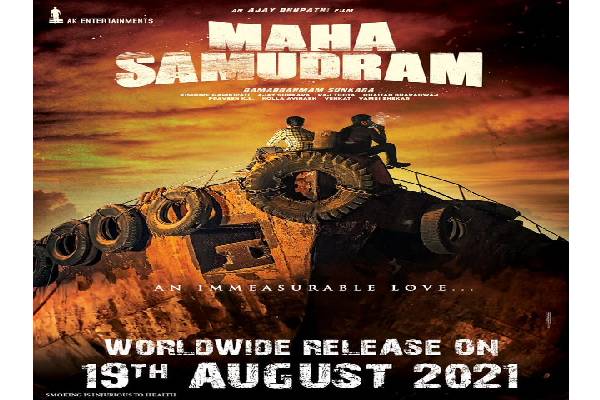 After the super success of RX 100, Ajay Bhupathi took two years for his next film that is titled Maha Samudram. Sharwanand and Siddharth are on board as the lead actors in this racy and stylish action thriller. Aditi Rao Hydari and Anu Emmanuel are the leading ladies and Jagapathi Babu, Rao Ramesh will be essaying other important roles in Maha Samudram. The film is carrying decent expectations and the concept posters along with theme posters received a top class response.

The makers today announced that Maha Samudram will have its theatrical release on August 19th across the globe. The shooting portions of the film will be completed by May. Chaitan Bharadwaj is the music director and Arjun Reddy sensation Raj Thota is handling the cinematography. Anil Sunkara’s AK Entertainments is bankrolling this emotional action drama. Sharwanand needs to bounce back in his career and Siddarth is making his comeback to Telugu cinema after a long gap with Maha Samudram.