Switch to: తెలుగు
Home Movies Movie News Megastar promises to do films till his last Breath 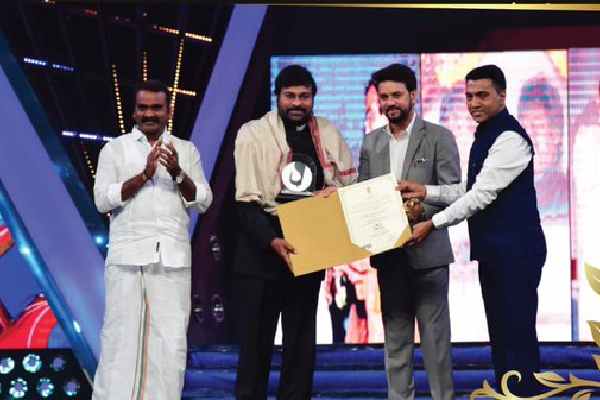 Megastar Chiranjeevi is felicitated with the Indian Film Personality of the Year 2022 and he received the honour this evening in Goa. Several celebrities from Indian cinema were present including the political personalities. Chiranjeevi thanked his parents, fans and the film industry for supporting him for four and a half decades. Chiranjeevi also said that he missed a decade due to politics and he was skeptical about returning back to films. But the audience accepted him back and he is now busy with various projects.

“I thank all my fans across the globe and it is because of their love I am here. I take this stage to reveal that I will continue to do films till my last breath. I also thank Indian Prime Minister Narendra Modi for his kind acknowledgment after I was selected for Indian Film Personality of the Year 2022. I would like to thank Akshay Kumar. Charan and Akshay worked for a tv show recently. I also thank IFFI and the Government of India, my friends, directors, producers and technicians for their support. It is because of them I reached this level” told Chiranjeevi.