While different ministers in YS Jagan’s cabinet are making different statements on AP’s capital creating confusion among all, the AP Industries Minister Mekapati Goutham Reddy on Thursday confirmed that Visakapatnam will become the executive capital of Andhra Pradesh as told by AP CM YS Jaganmohan Reddy in Legislative Assembly recently.

“Chief Minister YS Jagan has clearly said in the Legislative Assembly that AP would have three capitals which include Vizag as executive capital. And once Jagan gives a word, he won’t take it back,” Goutham Reddy said.

“You will never see a more welcoming state than Andhra Pradesh. With Vizag becoming capital, an economic revival will be coming to that area and investments will be coming in. I will see it as strategic advantage for entrepreneurs who like to look at Andhra Pradesh,” Goutham Reddy said.

He said that it is coastal based city with great growth prospects and has turned cosmopolitan over the past 30-40 years due to the different kinds of PSUs being established there. Goutham Reddy said, “It is right growth incubation centre that is poised to become the next Greenfield. The decision of the CM, I think it is going to serve the people of AP in great way.”

AP marching ahead with emphasis on education, health care: Guv 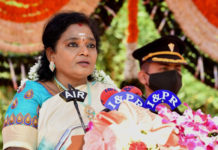