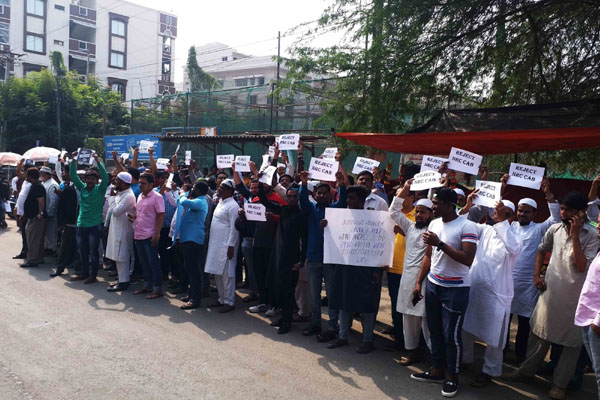 Muslims in Hyderabad and other parts of Telangana and neighbouring Andhra Pradesh on Friday pledged not to fill forms for National Population Register (NPR) and National Register of Citizens (NRC).

‘We will not fill the forms’ pledge was taken after Friday prayers at the historic Mecca Masjid here and several other mosques in the city and in the districts.

“We are Indians. The Constitution has given us freedom and we will continue to fight to safeguard this freedom. We will not fill NPR and NRC forms at any cost,” he said as he administered the pledge.

“We are citizens of India and the communal government can’t seek proof of our citizenship. We announce that we will not fill the forms at any cost,” he said.

Later, Malik claimed that 50 to 60 lakh people took the pledge after Friday prayers in mosques across Telangana, Andhra Pradesh and in Hyderabad-Karnataka region.

He said the designs of the communal forces to deprive Muslims of their citizenship could be defeated only if all people refuse to fill the forms or submit the documents.

“We have to remain united and nobody should feel that he is safe because he has the documents. Such people should look at Assam where despite submitting documents, many people were kept out of NRC,” he said

JAC Core Committee member and head of Wahdat-e-Islami Moulana Naseeruddin administered oath to people during his sermon at Masjid-e-Ujale Shah in Saeedabad here.

Leaders of various constituents of JAC administered pledge at various mosques. People were urged not to cooperate with the enumerators who visit their houses for NPR or NRC.