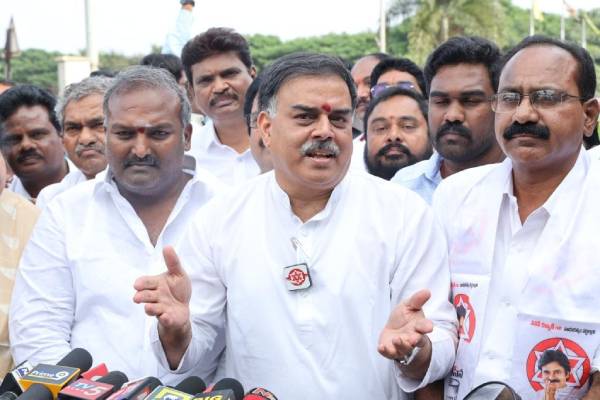 Manohar who reached Visakhapatnam for his weeklong tour in Vizianagaram district told media persons that Jagan Mohan Reddy was losing peace of mind with people revolting against him everywhere. He questioned the chief minister for not allowing the men and women with black dress at the public meeting in Narsapur.

He said that Jagan Mohan Reddy feared people attacking him and hence not coming out of his Tadepalli palace. Even when he is going outside, he is using curtains and rope parties due to fear of attack from the people, the Jana Sena leader said.

He also took strong exception to the chief minister calling Jana Sena as Rowdy Sena and said that all rowdies in the state were with the ruling YSR Congress. He sought to advise the chief minister to look at his own party and get to know the rowdies before making such comments on the Jana Sena.

Manohar said that the Jana Sena would strengthen its base in every village and get ready for the 2024 general election. He predicted the defeat of YSR Congress in the next election given the unrest seen among the people. He said every section of the people in the state were unhappy with Jagan Mohan Reddy’s government and were looking for change.