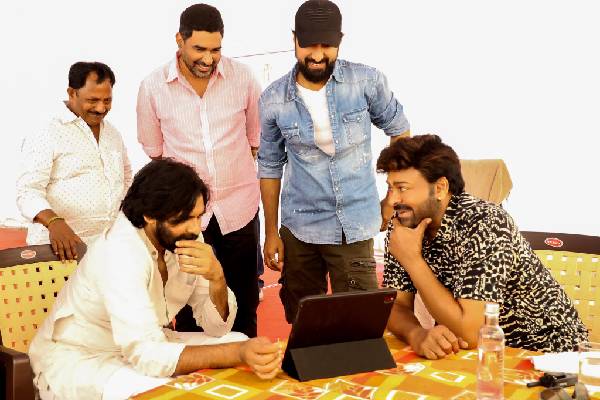 Megastar Chiranjeevi’s mass entertainer Waltair Veerayya is announced for Sankranthi 2023 release and the film is in the last leg of shoot. The makers announced that the first single ‘Boss Party’ and it will be out tomorrow. The makers released the pictures of Powerstar Pawan Kalyan bonding with Megastar Chiranjeevi on the sets of Waltair Veerayya. Chiranjeevi and Pawan Kalyan are said to have spent some quality time and are well-bonded during the shoot. Hari Hara Veera Mallu director and producer, Krish and AM Ratnam too are present on the sets.

Waltair Veerayya is directed by Bobby and is a mass entertainer set in the backdrop of Vizag. Ravi Teja plays a crucial role and Shruti Haasan, Catherine are the heroines. Rockstar Devi Sri Prasad scored the music and background score. Mythri Movie Makers are producing Waltair Veerayya and the film is high on expectations. Waltair Veerayya will clash with Balakrishna’s Veerasimha Reddy and Vijay’s Varisu.