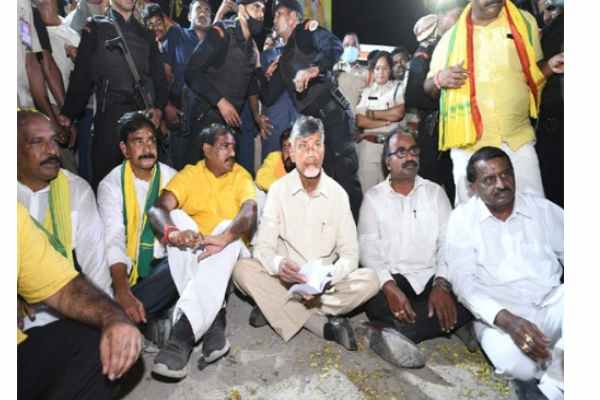 Chandrababu Naidu, who is currently touring the West Godavari district, tried to take a delegation of the party leaders along with him to the Polavaram Project site. When he reached the approach road to the project, the police stopped him saying that he had no permission to visit the site.

Chandrababu Naidu demanded that the police give him in writing clearly stating the reasons for the denial of permission. When he tried to break into the way, the police removed the barricades and closed the road with their vehicles.

Angered at the police behavior, Chandrababu Naidu sat on the road criticising the state government for destroying the Polavaram Project. He said that he took up the work on the Polavaram project as a mission and had completed 70 per cent of the work during his stint between 2014 and 2019.

Former ministers and TDP leaders Devineni Umamaheswara Rao and Gorantla Butchaiah Chowdary, MLA Nimmala Ramanaidu and other leaders were present along with Chandrababu Naidu in the protest. The TDP leaders were insisting on the state government and the police to give them permission to visit the project site.

As Chandrababu Naidu squatted on the road, the TDP ranks were reaching the spot to join his protest. With the number of activists increasing there the police are taking steps to control them.