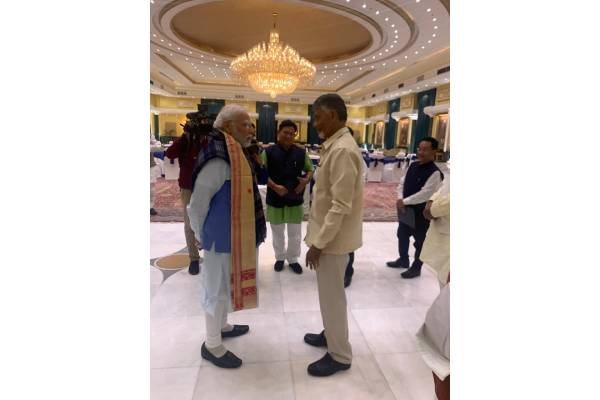 Addressing the G-20 meet held here with Prime Minister, Narendra Modi, in the chair, Chandrababu Naidu stressed the need for preparing a vision document, at least for the next 25 years, for future generations to focus on digital knowledge.

Prime Minister, Narendra Modi, acknowledged this and clearly mentioned the need for preparing the vision document on this.

Chandrababu Naidu asserted that India will emerge as number one or number two country in the globe “if we continue to encourage the digital world.” He said that India has a strong youth power and they should be encouraged to pursue their goals.

“The policies should be designed in such a way that they should create more opportunities for the youth. Only then will we progress well,” he stated.

Chandrababu Naidu, who is already known as a visionary, expressed his opinion at the conference that ”the best results can be achieved only by connecting the human resource power with knowledge economy.”

He said that Indians are really wealth creators across the world and wanted the youth to be encouraged further.

Presidents of various political parties across the country attended the conference held under the chairmanship of the prime minister.