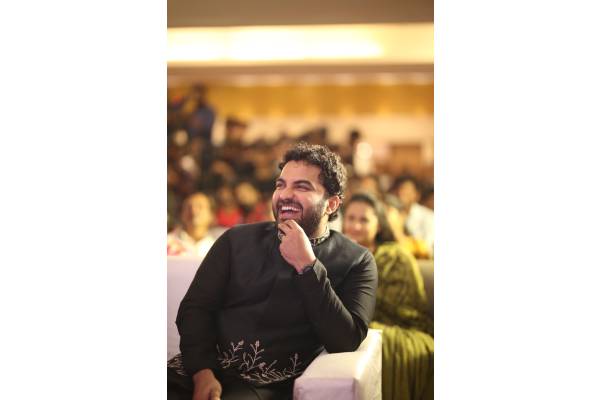 Ori Devuda is one of the most awaited upcoming family entertainer in Telugu from Vishwak Sen. Ashwath Marimuthu is directing the film. Little things fame Mithila Palkar and Asha Bhat playing the femal leads. The film has already created a very good impression on the audience with the promotional content.

As the release date approaches, the team is now preoccupied with promotions. Yesterday makers arranged a special Diwali Daawath event and lot of young actors like Siddu Jonnalagadda, Allari Naresh, Aadi Saikumar, Akash Puri, Sandeep Kishan, Karthikeya, and many others were attended the event with the team and wished entire team all the best.

Then our DJ Tillu Siddu Jonnalagadda entered the stage and delivered a heartfelt speech about Vishwak Sen. He said “Vishwak is one of the most passionate, dedicated, and mental crazy people I know. I’ve never seen such madness in anyone. I need to learn craziness and dedication from him.

He continued “Vishwak without a doubt the future bloody Superstar. I’m not joking about this to be nice, and I have no doubt he’ll be a Superstar.”

The actor was then kissed and hugged Vishwak Sen.

Dialogues penned by Tharun Bhascker. The fantasy rom-com also stars Asha Bhat in the lead role, alongside Vishwak and Mithila. According to reports, Liger director Puri Jagannadh will also have a cameo appearance in Ori Devuda. Prasad V Potluri of PVP Cinema is producing the film.