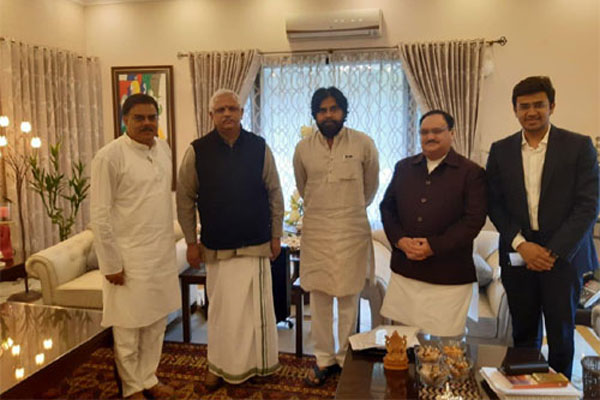 Jana Senani Pawan Kalyan met BJP National Working President JP Nadda in Delhi today. He raised the sufferings and problems of common people in AP because of Jagan Reddy misrule. The chaos surrounding the Capital shifting has been plunging the whole of AP into a deep, irreparable crisis. Pawan told the BJP leadership about the police and YCP private armies’ brutalities on the opposition parties in the state.

Pawan has also extensively talked about the mind games that CM Jaganmohan Reddy and his Ministers are playing with the helpless people. The average voters are feeling sorry for having blindly trusted to give brute majority to the YCP. Pawan has told Nadda how the state government itself is making confusing statements to cheat the people before the Capital shifting.

JP Nadda has enquired about the prevailing feelings of the people about the decisions of Jagan Circar.

Pawan was accompanied by Nadendla Manohar in this visit. He couldn’t meet Nadda yesterday due to sudden changes in their engagements. Pawan-Nadda meet triggered political speculation on the BJP preparing itself to take a final stand as a national political party on 3 Capitals decision. At the same time, the Modi government will react the moment AP Assembly resolution is passed to shift Capital.