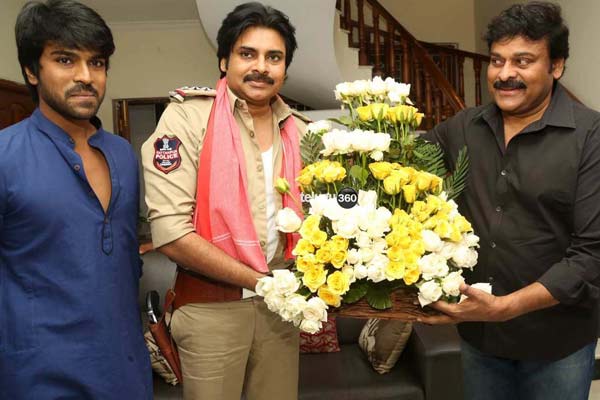 Keeping full stop to all the differences and speculations about the relation between Powerstar Pawan Kalyan and Megastar Chiranjeevi, Pawan on Sunday evening met his brother at later’s residence. He visited Chiru to congratulate him for the success of Bruce Lee in which Chiru did a cameo.

Interestingly, Pawan came all the way to Chiru’s residence dressed in police attire which is current avatar in Sardaar Gabbar Singh.

Speaking to media, the actor said “I’ve been hearing a lot about Chiranjeevi’s cameo in Bruce Lee and I felt very happy that he is back on screen after such a long time. I came to congratulate on his performance and expecting much more his 150th film.”

Pawan was received by Ramcharan and the Gabbar Singh actor presented Chiru with a bouquet and congratulated him.