Shriya Saran is one of the top Tollywood actors for a few years. However, some of the new actors are ruling the world now. But still, Shriya is getting some interesting offers in Tamil. Also, Telugu filmmakers are taking her for special and supporting roles.

Though her film offers in Telugu got reduced now, her hotness and the same stunning personality are making people fall for her. The actress shared a hot sizzling pic on social media that made men go crazy over her.

Her torn grey jeans and Magenta top which reveals her cleavage made her look even sexy. Sitting on a wooden chair, with full of attitude, giving her best pose, the beauty achieved numerous likes for her pic on Instagram.

Speaking about her upcoming films, she is going to appear in a special role in Ram Charan’s RRR and also signed for three Tamil films and a Hindi film. 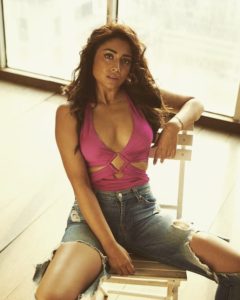