Mahesh Babu’s upcoming film Sarileru Neekevvaru is progressing at a swift pace with no break. Already the team has wrapped up a hectic schedule in Jammu and Kashmir and completed a hilarious episode in a special train set erected in Hyderabad.

An on-location picture from the shooting spot of this film is going viral in social media since today morning. This picture seems to be taken after canning the hilarious comedy episode in the train set featuring the principal cast of the film. It has Rashmika Mandanna, Bandla Ganesh, Sangeetha, Hari Teja and a few other character artists in a happy mood along with director Anil Ravipudi.

It is a known fact that Anil Ravipudi promised a laugh riot with this particular episode and audience are eagerly waiting to find what he has in store for them. It is learnt that this train episode will last for nearly half an hour and will leave audience in splits. Mahesh Babu is playing an army major in this film.

Sarileru Neekevvaru is slated for release in Sankranthi next year. Anil Sunkara and Dil Raju are bankrolling the film. 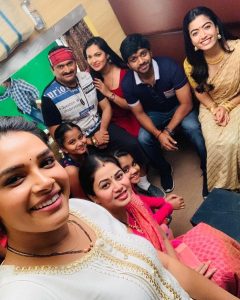