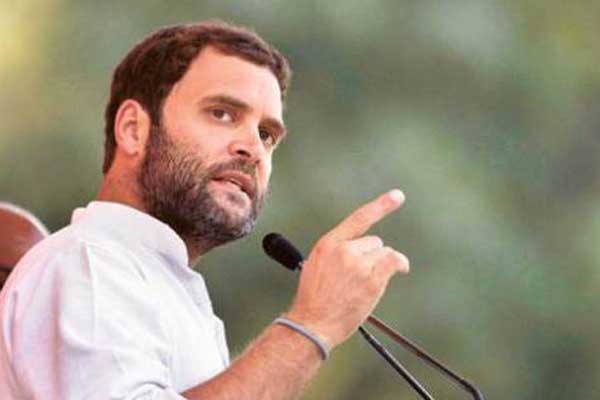 Congress Vice President Rahul Gandhi on Sunday slammed Prime Minister Narendra Modi for going back on a promise made in Tirupati temple to grant special category status to Andhra Pradesh.

He asked Modi what kind of Hindu he is, who breaks his promises and tells lies to people.

“Modiji talks of Hindu dharma. He says ‘I am protector of Hindu dharma’. I want to ask what kind of Hindu he is to break promises made in Tirupati and speak lies to people,” said Gandhi while reminding him of his promise in 2014 to grant special status to Andhra for 10 years.

The Congress leader was addressing a public meeting here Sunday night along with leaders of Samajwadi Party, Janata Dal-United, the DMK and the Communist Party of India to demand the Central government fulfil its commitment made to Andhra Pradesh at the time of bifurcation.

Gandhi said there was some pressure from Modi and BJP on Chief Minister N. Chandrababu Naidu and YSR Congress Party leader Y.S. Jaganmohan Reddy as both had compromised with the Centre over the issue.

“They may have some fear in their heart and that is why they are not standing with the people,” he said.

Gandhi said special status would have benefited the state to the tune of thousands of crores as 90 percent of the funds coming from the Centre would have been in the form of grants.

Stating that the promise of special package was made by Manmohan Singh in his capacity as the Prime Minister of the country, he said it was the right of the people of Andhra Pradesh.

He promised that granting special status would be the first task of the government of Congress and its allies in 2019.

Recalling that the previous UPA government led by Congress had declared Polavaram a national project, the Congress leader said Chandrababu Naidu entered into a deal with the present government under which the state government will construct the project.

“This is because if the government of India spends the money to build this project, nobody will get a commission,” he said.

Samajwadi Party leader Akhilesh Yadav and Janata Dal-United leader Sharad Yadav said if Naidu was sincere in getting special status for the state, he should set this as the precondition for Telugu Desam Party’s support in the election for the President.

Sharad Yadav said Bihar was also demanding special status and it would stand with the people of Andhra Pradesh for this cause.