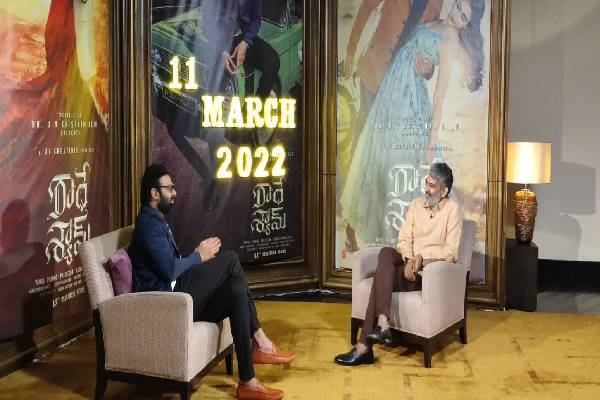 Prabhas and Pooja Hegde-starrer ‘Radhe Shyam’ is gearing up for its release soon. Rajamouli, who has worked with Prabhas for the magnum opus ‘Baahubali’ seems to have also been involved in the movie.

An interesting buzz related to the movie ‘Radhe Shyam’ has surfaced on the Internet. Apparently Rajamouli has watched a special screening of ‘Radhe Shyam’. He also has suggested a few changes to the final copy, keeping Prabhas’ pan-India game in consideration. However, there is no official confirmation regarding the same.

It is also reported that Rajamouli and Prabhas have shot for a promotional video together, which will promote both ‘Radhe Shyam’ and ‘RRR’.

Prabhas’ ‘Radhe Shyam’ is scheduled to hit the silver screen on the March 11 and the promotional campaign is in full swing for the intense love saga.