Rana Daggubati spent almost four months in USA and is recovering well. His family took utmost care of his health after he underwent a kidney transplant. Rana Daggubati returned back to India and he was busy with his film engagements. The actor is yet to join the sets of his next and he will join the shoot of Virata Parvam from December as per the update. Rana Daggubati along with his father Suresh Babu flew to USA for his medical checkup.

Rana Daggubati and Suresh Babu will be back to the city by this weekend informed a source. Rana who got operated in USA will undergo medical tests. Suresh Babu is in plans to start the promotions of Venky Mama from next week. The film features Venkatesh and Naga Chaitanya in the lead roles. The release date of the film will be announced this Saturday on the occasion of Naga Chaitanya’s birthday. 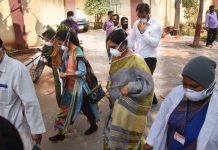