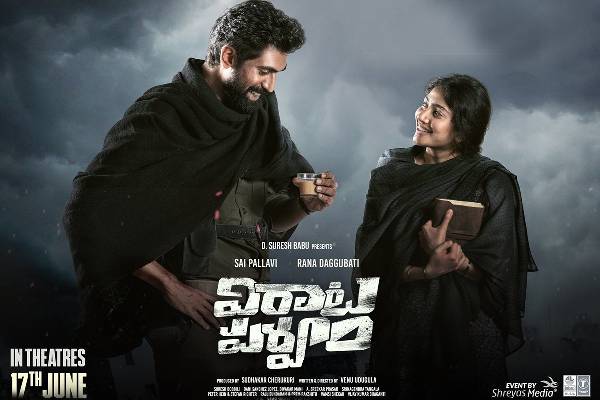 Rana Daggubati and Sai Pallavi are teaming up for the first time and the film titled Virata Parvam is a social drama that has some packed action and an intense love story. Venu Udugula is the director and SLV Cinemas are the producers. Virata Parvam released across the globe today and here is the review of the film:

Vennela (Sai Pallavi) is born during a Naxal-cop war and a doctor turned Naxalite (Nivetha Pethuraj) helps Vennela to see the light and names her. Vennela is an independent girl who lives in reality. She falls in love with a Naxalite leader Ravanna (Rana Daggubati) after she goes through his literature which is a revolution. She elopes from her house after her family fixes her marriage with her brother-in-law. Vennela goes in search of Ravanna and the rest of Virata Parvam is all about her journey in meeting Ravanna and what happens next. Watch the film to know about their love story.

Virata Parvam is a film that is inspired from a real incident. The film sounds like a documentary from the first frame. The love story was not properly penned and presented. Vennela falling in love with Ravanna looks unnatural and the entire romantic thread was not convincing. The first half of the film has no highs and it happens on a flat note. The interval portions are well penned and it is the performances that drive Virata Parvam. The cinematography work and the background score stand as a huge support for this soulless film. For a film like Virata Parvam, there should be a strong connecting drama that elevates the core episodes and it goes missing in the film.

Once Sai Pallavi runs away from her house, the entire plot gets deviated. The second half of Virata Parvam is loaded with too much-unwanted stuff which makes no sense. The film has enough potential to be an intense action-drama with a soulful romance but the director fails to balance the film. Several episodes are predictable and dragged throughout. The editing work should have been quite better to make the film look crispier. Virata Parvam will not connect much to the audience as the backdrop of Naxalites is no longer in the discussion. Vennela’s search for Ravanna never ends and this tests the patience of the audience. The performances are the major saviors of the second half.

Sai Pallavi steals the show like always and she did a splendid join as Vennela. She has been balanced in the role that has dual shades. In emotional episodes, Sai Pallavi did her part well. Rana Daggubati shines in the role of Ravanna and his character has less screen presence than that of Sai Pallavi. Rana looks apt in the role of a Naxalite. Naveen Chandra and Priyamani are seen as the supporters of Ravanna as fellow naxals and they are good. Nandita Das plays a teacher and she has a decent role. Rahul Ramakrishna, Sai Chand and Eshwari Rao played other prominent roles. All the other actors are good.

Virata Parvam lacks a proper narration though the picked story was a right choice. Balancing drama, emotion and a love story in this hard-hitting drama is not an easy task and the director fails badly in balancing them. The background score and the cinematography work as the major assets of Virata Parvam. The production values are good. The songs are ok. Venu Udugal’s work is a disappointment.

Virata Parvam tests the patience of the audience and the film offers nothing much except some fine performances from Rana Daggubati and Sai Pallavi.