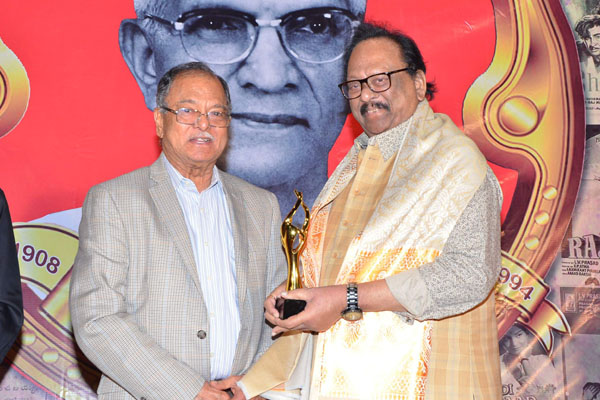 Prasad Creative Mentors Film and Media School Managing Director Kovvuri Suresh Reddy said, ” My experience won’t be enough to speak about LV Prasad garu. I am lucky enough to be here as a part of his institution. Thanks to Ramesh Prasad garu. On the occasion of LV Prasad gari 112th Birth Anniversary, we are presenting gold medals to 20 students who trained in Prasad Creative Mentors Film and Media as a part of pre-convocation. Our film school offers wide areas to get trained as technicians and directors in film industry.”

Rebel Star KrishnamRaju said, ” There is nothing new I can say about LV Prasad garu. He had spent every penny he earned for the development and welfare of The Film Industry. He also established the country’s top most eye hospital. He is one of the main reasons behind my successful career. Back then, when my ‘Chilaka Gorinka’ film disappointed me, I thought of going back to my hometown. Dooney garu approached me for ‘Nenante Nene’. Krishna garu and Nagabhushanam garu played two roles in that film and he asked me to play third role which has some negative shades in it. When I was skeptical of doing it, LV Prasad garu came to know about it and motivated me that it is the character which makes us dearer to the audience but not the shades of it. Then I told Doondy garu that I will play the role. With some changes to it, I acted in ‘Nenante Nene’ and it became successful. Then by playing various characters throughout my career I have reached to this position. I will be indebted to LV Prasad garu for motivating me. I feel lucky to have a strong bond with his family.”

Telangana State IT Principal Secretary Jayesh Ranjan said, ” I am very happy to attend the event of a legendary personality like LV Prasad garu. He made films in every Indian language. I love his ‘Ek Duje Ke Liye’. I watched it for so many times. He has introduced many popular Indian actors, technicians. It’s very good to see that Prasad Creative Mentors of Film and Media School has been established on his Birth Anniversary to encourage young talent. Our Hyderabad has provided the VFX for Baahubali, The pride of India and Prasad group played a key role in it. I wish Prasad Creative Mentors will train many top-class VFX professionals.”

LV Prasad Group Chairman, Son of Legendary LV Prasad, Ramesh Prasad said, ” I cherish each and every moment I spent with my father. He is a very great human being. I remember him always working. He didn’t had proper studies. He went to Bombay with 100 rupees and joined as a gatekeeper for a studio. When he had settled down facing many hardships he came and took my mother to Bombay. His commitment made him learn all Indian languages. He had very good relations with NTR, ANR, Savitri, Jamuna, Krishna, KrishnamRaju. He made many Successful films under Prasad Productions PVT Ltd banner. He wanted to serve people who gave him the success. So he formed a trust and donated 1 crore rupees to it. LV Prasad Eye Institute was formed with that money only. Today it is one of the best eye hospitals in the world. I am proud to say that he is my father. I built Prasad’s IMAX following his steps. Government of India has released a postal stamp on his name in 2006. Now we are training students in Animation and Gaming under Prasad Creative Mentors. I believe it will become successful and help to create many young talent. We will always extend our support to create more ‘Baahubali’s”