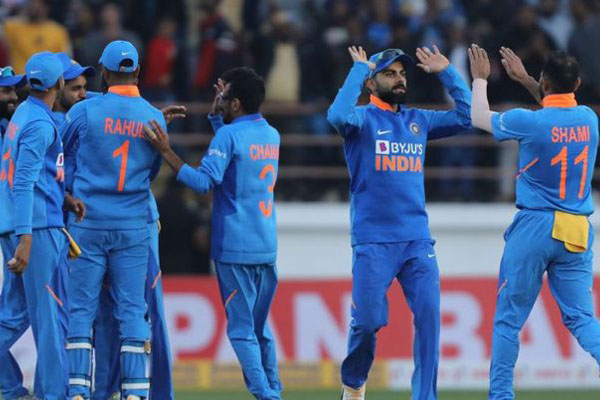 India beat South Africa by 36 runs in the second ODI at the SCA stadium in Rajkot to level the three-match series between the two sides 1-1. Shikhar Dhawan, KL Rahul and Virat Kohli helped India post a total of 341 to chase. In response, Australia were all out for 304 despite Steve Smith scoring 98.

Openers David Warner and Aaron Finch, who posted a record 258-run stand to help Australia stroll to a win in the first ODI, could not do a repeat of their heroics with the former being dismissed in the fourth over. Smith came in at number three and put up 62 with Finch before the Australian captain fell to Ravindra Jadeja on account of a close stumping call in the 16th over.

Finch had attempted to hit Jadeja over extra cover but missed the delivery due to the turn. Finch dragged his backfoot marginally outside the crease and wicketkeeper Rahul whipped the bails off immediately. Replays made it a tough call for the umpire to make but the decision went India’s way in the end.

However, Marnus Labuschagne, playing his first ODI innings, stuck on with Smith and the pair gave Australia the upper hand in the middle overs. They put up 96 for the third wicket before Labuschagne holed out at mid-off off Jadeja on 46. Smith however looked settled and was cruising to his ninth ODI ton when a loose shot cost him his wicket.

Kuldeep Yadav, who was wicketless in the first eight overs, bowled the 38th over and got Carey when the latter sent the ball straight to Kohli at extra cover. It was Kuldeep’s 100th ODI wicket and two balls later, Smith played on and had to walk back two runs shy of his hundred.

Ashton Turner and Pat Cummins were dismissed off consecutive deliveries by Mohammed Shami in the 44th over. Both players were done in by pinpoint yorkers directed at the middle stump. Shami sent in a leg stump yorker for his hat-trick ball and hit Mitchell Starc on his pads but the umpire didn’t raise his finger with the ball clearly going down the leg side.

Navdeep Saini then got India closer in the 47th with the wickets of Ashton Agar and Starc off the first and third balls of the over. Kane Richardson then delayed the inevitable by smashing Mohammed Shami for three fours and a six in the penultimate over. Jasprit Bumrah ended the match by dismissing Adam Zampa off the first ball of the last over.

Earlier, Shikhar Dhawan scored his third straight fifty with a sublime 96 from 90 balls, his innings laced with 13 fours and a six as skipper Kohli smashed a 76-ball 78 (6×4). But it was Rahul, batting at No.5 who gave India the much-needed push in the last ten overs with his aggressive batting and range of shots. Rahul was run out in the final over for 80 off just 52 balls, his quickfire knock studded with six fours and three sixes.

For the Aussies, leg-spinner Adam Zampa was the pick of the bowlers with figures of 3/50.

The decisive third ODI will be played on Sunday at the Chinnaswamy stadium in Bengaluru.