Title locked for Balakrishna’s Next 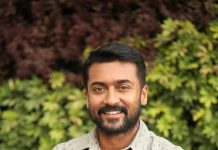 Suriya puts an end to Speculations in Style