All posters of Saaho that were released so far presented Prabhas in a lumbersexual avatar with an enviable style quotient. His debonair mannerisms in the trailers have left fans wanting for more and set a high bar on the film.Now, a new poster has been unveiled and it reveals the mass side of Prabhas. The Baahubali actor is seen with an intense look in baadas avatar while fighting with goons. The is the first poster in which Prabhas is seen in a complete mass look.

The film has been creating waves ever since the breathtaking visuals in the trailers have struck a chord with audience. The film has done a tremendous pre release business and the makers are planning a massive release worldwide on August 30th. Directed by Sujeeth, the film has Shraddha Kapoor and Neil Nithin Mukesh in significant roles.

UV Creations is the production unit behind this big budget entertainer. 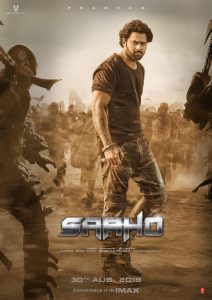