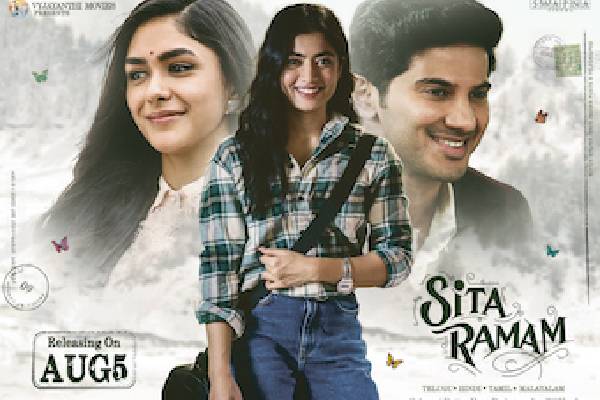 Tasteful director Hanu Raghavapudi delivered two massive duds Lie and Padi Padi Leche Manasu. Both these films are cost failures and the producers lost big amounts through these projects. But Swapna Dutt and Priyanka Dutt believed in his vision and magic. They spent lavishly on Sita Ramam which is winning the hearts of the Telugu audience. The film received a stiff competition in the name of Bimbisara. The audience preferred to watch Bimbisara on Friday and Sita Ramam opened on a normal to below-average note.

This is because the film had no stars. Dulquer Salman is a proven actor but he has no great fanbase in Telugu states. Mrunal Thakur is hardly known to the Tollywood audience. It is the production values of Sita Ramam that took the film to the next level apart from the performances and the poetic narration. The production house spent enough time on the script and believed in the vision of Hanu.

They got the best technicians and actors for even the smallest roles. A major portion of the film is shot in the remote locales of Kashmir and Himachal Pradesh. At times, the budget went overboard and the pandemic delayed the project by months. But the team of Sita Ramam waited for their day.

The family crowds and the youth are now rushing to the theatres to watch this classic. After a decent weekend, the film is having a stupendous run on weekdays all over. The Tuesday numbers are higher than on Monday which is an indication that Sita Ramam is heading towards a huge commercial hit.

Kalyanram’s Bimbisara too is running with packed houses after a super strong weekend. Both Bimbisara and Sita Ramam brought back the glory of Telugu cinema.