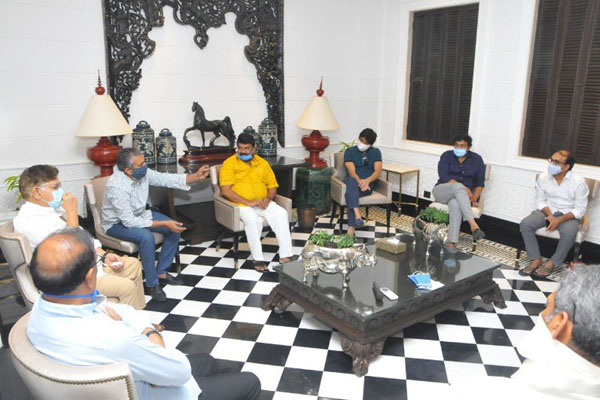 All the Tollywood bigwigs met at Megastar Chiranjeevi’s residence to discuss about the new guidelines to be taken post coronavirus lockdown. Telangana cinematography minister Talasani Srinivas Yadav was present to collect the opinions about resuming the shoots and when to reopen the theatres. Chiranjeevi, Nagarjuna, SS Rajamouli, Koratala Siva, Trivikram Srinivas, VV Vinayak, Allu Aravind, Dil Raju, C Kalyan, S Radha Krishna, UV Vamshi and others were present at the meeting.

Top director SS Rajamouli had a request for resuming the shoot so that he could work with a team of limited crew members along with following all the social distancing and other guidelines on the sets. He reminded that not all the episodes for film shoots need a number of cast, crew members. He got support from several filmmakers who wished to resume the shoots of Telugu films at the earliest. Several filmmakers discussed and suggested about the new guidelines to be followed. Talasani Srinivas Yadav promised to take all the issues to Telangana Chief Minister KCR and come out with the new guidelines.