Indian Superstar Aamir Khan is called as the Mr Perfect of Indian cinema. He is never in a hurry and spends ample time on the film and manages to get the right and comfortable release for every film. His career graph reached all time high in the recent times and he hasn’t tasted a failure. Along with critically acclaim, all the movies managed to rake massive commercial numbers. Then came a shock called Thugs of Hindostan.

The whole country was left surprised how Aamir stepped into the project. The film has been named as one of the biggest disasters of Indian cinema. Aamir is said to be left in deep shock with the performance and hasn’t announced his next. He is out of reach from some time and wishes to take time to finalize his next. Things were completely different before the release of Thugs of Hindostan and they changed completely after the film’s release. A close source revealed that Aamir isn’t out from the debacle and he needs more time.

Aamir was in talks with Shakun Batra based on the life story of Osho which is kept on hold now. Aamir Khan was also in talks for Mahabharata and the actor is said to take some more time to finalize his next. 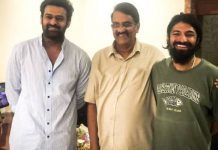