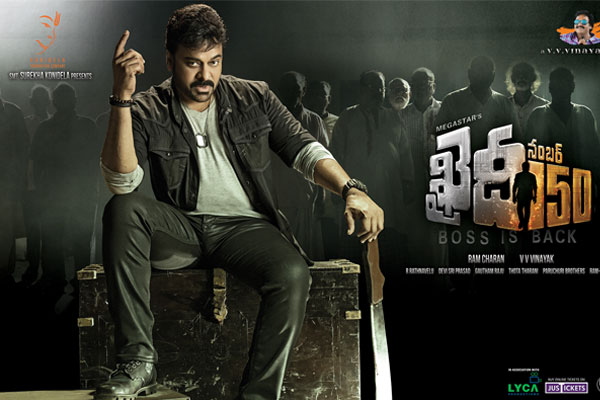 Megastar Chiranjeevi is returning to silver screen, in a full length role, for the first time in 9 years. Fans have been waiting with a bated breath to watch their demigod on the big screen. Already, the songs and posters featuring Chiru back in elements have created a huge buzz on the film. Khaidi No 150 is one of the tent-pole films in 2017. An official remake of Tamil smash hit Kaththi, the film is helmed by VV Vinayak and has Ram Charan in the producer’s chair. Kajal Aggarwal is the film’s leading lady and Devi Sri Prasad rendered the soundtrack. The film has done a stunning prerelease business in Telugu states and Overseas. Let’s see if the film can weigh the heavy expectations and emerge as a hit this Sankranti.

A group of farmers, led by social activist Shankar ( Chiranjeevi) , fight against a corporate company which wants to grab their lands. Annoyed, Agarwal ( Tarun Arora), the chief of the corporate, tries to kill Shankar. Meanwhile, a petty thief Katthi Srinu (Chiranjeevi) , who escaped from Kolkata jail, bumps into the scene of murder attempt on Shankar. Looking at Shankar who fell unconscious, Srinu realizes both look alike. To permanently escape from jail, Srinu Impersonates Shankar and he is taken into custody by Kolkata police.

Later Srinu understands the circumstances in which Shankar and his group of old men are fighting a cause, determines to fulfill the shoes of Shankar.

Rest of the story is how Srinu fights for the Neerooru village people, makes them win the case against the corporate

Khaidi No 150 is a Chiranjeevi’s one man show. He doesn’t look like someone who had taken break for 9 years, shows same old enthusiasm in acting. He is corpulent, other than that looked good in Srinu role.  Kudos to Chiranjeevi for taking extreme care to look younger in this movie.However, as Shakar he is pale.

Kajal has nothing to do literally except dance in songs. Her total screen presence is less than 3 minutes.

Tarun Arora as main villain looks dull as the characterization is not properly done.

Brahmanandam, Posani , Ali and Raghu babu did act to the script

Nagababu appears as a judge,Ram Charan shakes his leg with Chiranjeevi in one song,  other mega family heroes such as Allu Arjun, Sai Dharam Teja and Sir Allu Sirish appear in rolling titles.

Khaidi No 150 movie is not just another movie in which you can straight away deal with only the story. Director and writers have an additional responsibility of re-launching Megastar career after 9 years’ gap, that too after his bumpy ride in last few years. In that process, they put months of deliberation, hard work and finally came up with a decent result.

Khaidi No 150 ensures Megastar chiranjeevi fans get a full meal and , at the same time disappoints normal audience who expected a better quality product as his milestone movie.

While the backdrop of the story appears a social cause, it is very superficial and is diluted by injecting many commercial elements.

Dialogues which got maximum response from fans are:

On top of commercial elements, not everyone will be able to connect to the farmer’s theme, which is the soul of the movie. Urbane audience and youth might not get it.

Brahmanandam , Raghubabu comedy track works out in parts to mass audience. Ali as Katthi Srinu’s sidekick has got lengthy role but he fails to evoke much laughter. Posani Krishna Murali is OK in couple of scenes he is seen.

For families and youth, except those who are watching the movie for seeing Megastar on big screen after 9 long years, there is nothing much in offer from this movie

Ratnavelu’s cinematography is fantastic, captured foreign locations and “Ammadu..” song very well. Devisri Prasad’s audio songs are already chartbusters, background score is good and most of the background score is re-used from Tamil version. Devi Sri Prasad’s love for Megastar can be seen in the audio he delivered for this movie.

Ram Charan as a producer has spent well wherever it is required. Though production values are adequate, as per story, there is no much grandeur in the film ..hence less production cost overall

Box-Office: In overseas as well as in India, this movie has taken unprecedented openings on First day. Overall, due to commerical elements coupled with gigantic openings it has already taken, Khaidi No 150 will end up as a commercial hit in full run. Range of the hit depends on other two Sankranti releases’ outcome.

Verdict : Khaidi No 150 is a pretty ordinary movie sprinkled with fans’ appealing commercial elements. While First half is weak, second half is slightly better – with a lengthy weak climax. Overall, it falls short of expectations and strictly for fans