Does BJP have future in Telugu states ? Post-Pushkara Analysis 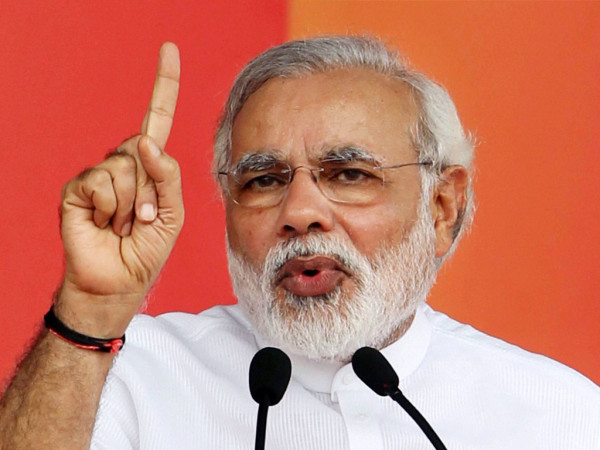 Two Telugu states, Andhra Pradesh and Telangana, appear to be not in the side of Hindutva of Sangh parivar brand. The Godavari Pushkaralu in the two states have been celebrated with Telugu fervor without any saffron being painted to the event. For the first time India, such a large congregation of Hindus, remained untouched by Vishva Hindu Parishad or any other Sangh Parivar outfit. We know the Kumbh Mela is totally colonized by VHP. By associating itself with such religious congregations VHP normally “Hindutvize”  the event and pave the way for  BJP’s entry. Surprisingly, the Godavari Pushkaralu of Andhra Pradesh and Telangana have been celebrated without any shade of saffron. Even the visit and holy dip of VHP International working president Pravin Togadia had largely gone unnoticed. Togadia, whose supreme strength is courting controversy, also had been silent when he was in Antarvedi of East Godavari district. He did not utter a single word about Hindutva- very unbecoming of Todagia. Normally, Sangh Parivar appropriates all rights of celebrating the Hindu festivals. VHP establishes coordination committees for the festivals like the one in Hyderabad, Bhagyanagar Ganesh Utsava Samiti. The sound and fury of Nimajjanas in Hyderabad has been the result of overwhelming participation of Sangh groups. VHP was found on the date of Lord Krishna’s birth. It organized first world Hindu Conference on the occasion of Kumbh Mela in Allahabad. Dharma Sansads were organized in Haridwar and Allahabad Kumbh Melas. By these sessions VHP had been successful  in bringing majority Sadhus under its fold. It organized Sanskrit Sammelans. In fact, the VHP activities during Kumbh Melas had prepared a cultural ground for the entry of BJP. The areas of BJP influence are exactly the areas where the VHP controls the melas and festivals. Even Ayodhya movement owes its brith to these VHP congregations. Of course, Karnataka is an exception.

But, the Telugu Pushkaralu, which attracted about 8.5 crore people, were totally free of Sangh parivar’s influence. In the both the states,  they looked state sponsored, with chief ministers alone taking control of the situation. In the case of Andhra Pradesh, chief minister Chandrababu Naidu made Rajahnundry temporary capital to oversee the mega event of Maha Pushkaralu. Neither Naidu, nor T-CM Chandrasekhar Rao left an inch of space for Hindu right wing organizations. Or is it largely the nature of Telugu people not to ‘Hindutvize’ the practice of worshiping “Talli Godavari”. 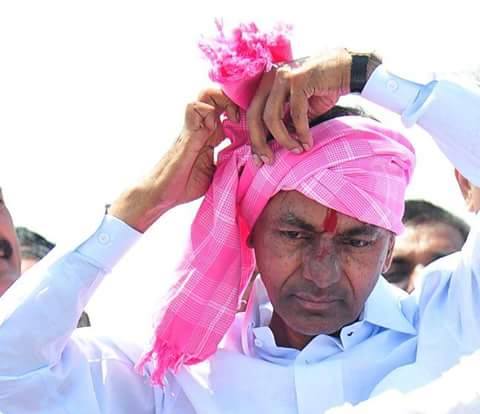 The  Hindu-Telugu mobilization was so massive that YSRC president Y S Jagan was also compelled to feel that a holy dip was politically important though with cross hanging from his neck.

The Pushkaralu  partly answer the BJP’s existential conundrum in Andhra Pradesh and Telangana. Both governments ensured that sangh parivar did not sneak into pushkaralu. Both Naidu and KCR emerged more Hindu than any other Hidutva leader.

The Telugu lands have largely proven immune to Modi wave. Despite clear Modi wave across India before the 2014 elections, Modi managers failed to tame united Andhra Pradesh. The fact that  the party had to settle down for an alliance with Telugu Desam party itself was the admission that it was difficult to paint saffron Andhra or Telangana regions.

One year into office at the center under Prime Minister Modi’s leadership, the party is not still sure of the road it has to take to become independent of Telugu Desam party in Andhra Pradesh.

According to sources in the party there has been a two-line struggle going on among the top brass of the party. Line one, there is no need to antagonize a strong NDA partner in AP by attempting to graduate itself from an ally- status to an independent party. The  rival line is that the objective of BJP is to emerge stronger and should be in a position to form the government someday. The BJP, the sources said, is not averse to play caste card to attract new sections of the Telugu society. If the sources are to be believed, the party is on lookout for a strong Reddy or Kapu leader to lead the party so that it could make forays into the new communities. The term of incumbent party president Haribabu will end in December.  The strategy is that since Hindutva is not all a force in Telugu lands, let us go in for social engineering.

As many Reddys and Kapus are disillusioned with existing parties, BJP wants to attract them by  having  party president from these castes. Sources said, names of party leaders such as MLC Somu Veerraju, senior leader Challapalli Narasimha Reddy, party AP general secretary S Suresh Reddy, former minister Kanna Lakshminarayana etc. are doing rounds in the party circles. Some in the party argue that former union minister D Purandeswari, though a Kamma, is a right bet to free the party from the influence of TDP 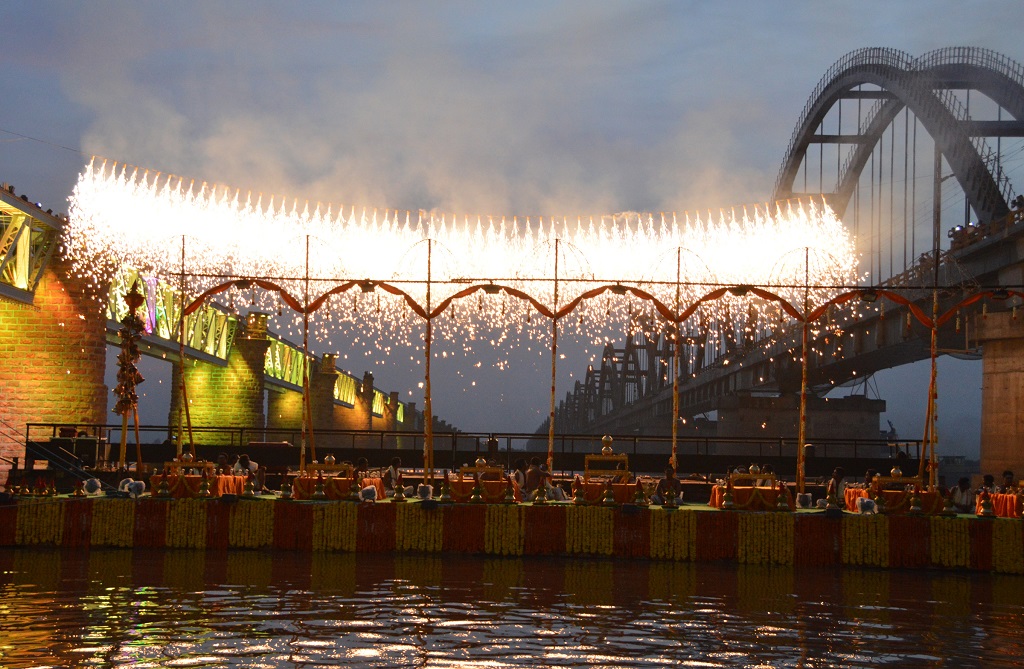 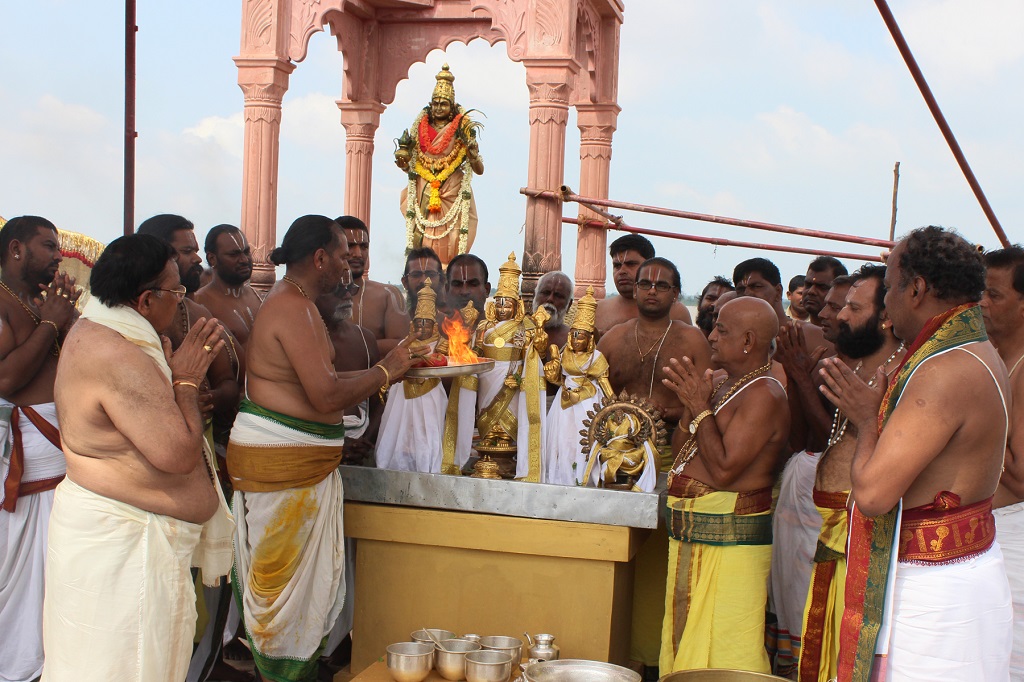 Godavari Maha pushkaralu coming to an end today, Grand Scale closing  events are in progress in Rajahmundry and also in  Telangana. We will keep adding more photos from the events. Chakra Snanam, Last day crowds photos from RJY are added, closing ceremony photos will be added in a while. Keep checking this space. 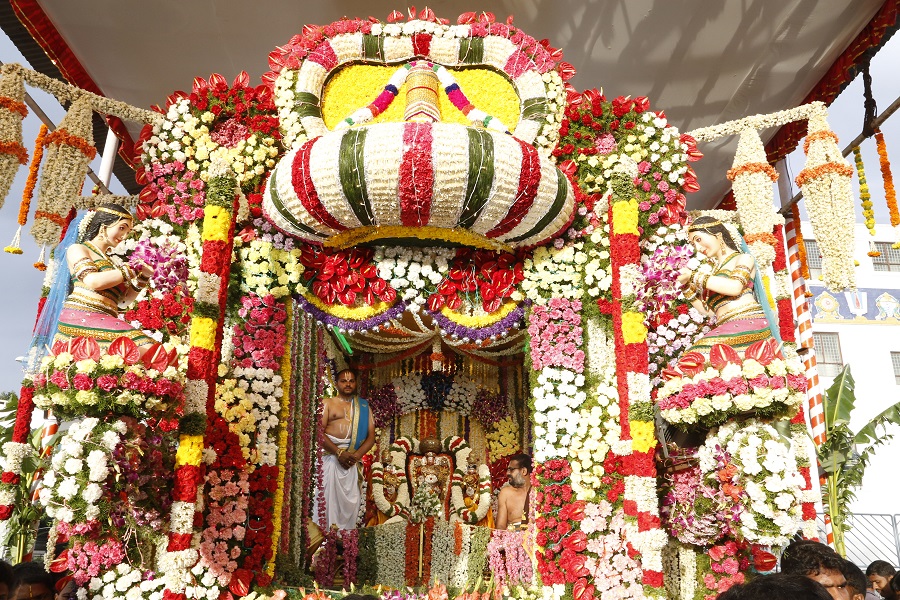 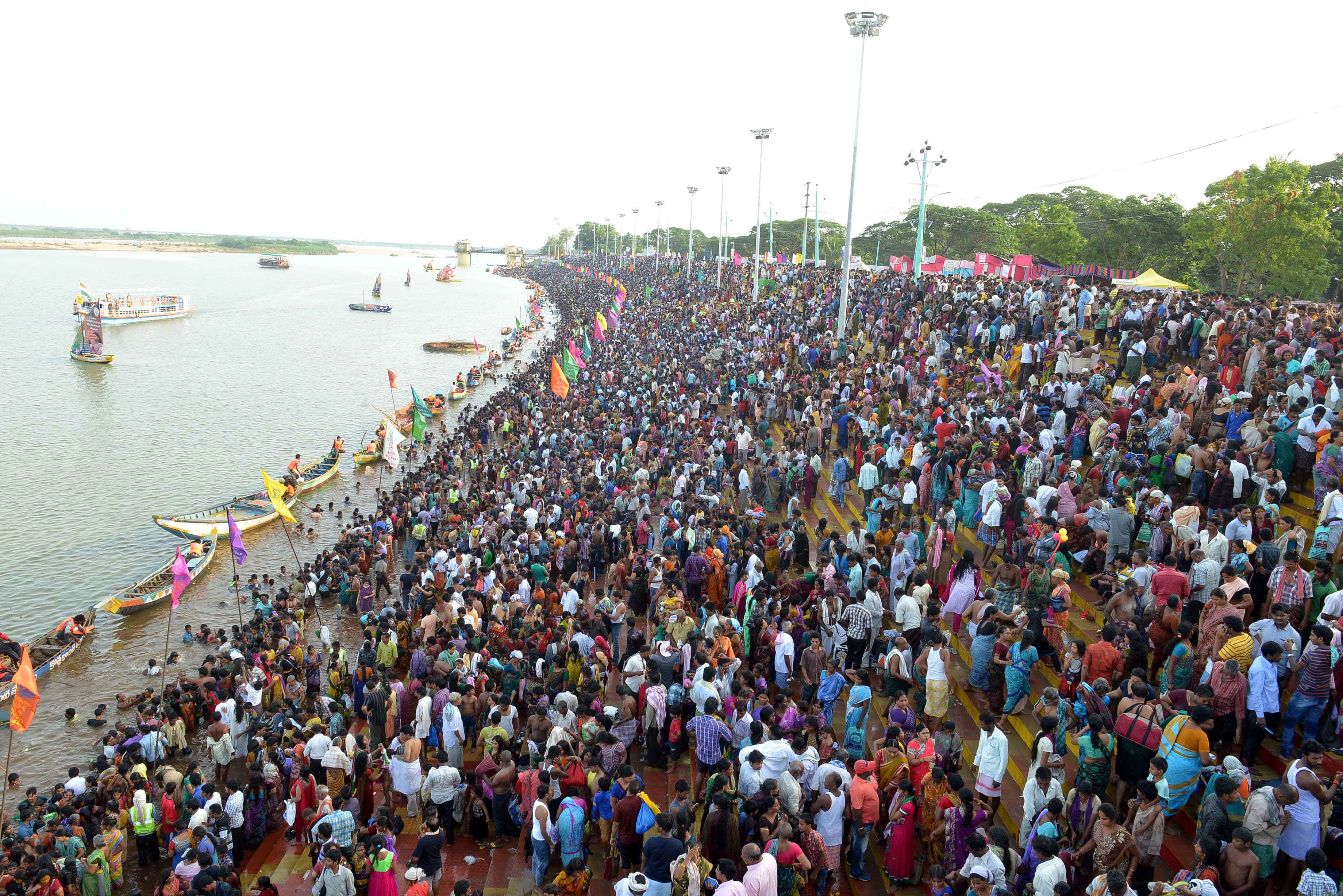 Rajahmundry Turns into Sea of Humanity 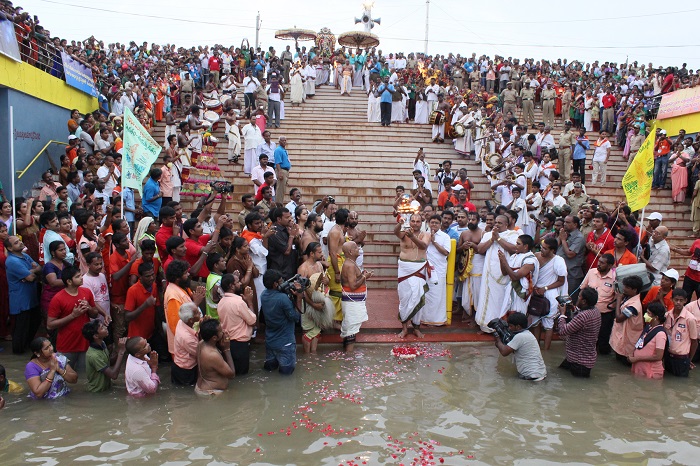 Undeterred by the stampede, lakhs of people are thronging the puskharalu to take a holy dip in River Godavari.  The tragedy that struck the sacred  event on Tuesday morning seems to have had little effect on the devotees who are arriving in Rajahmundry in thousands in each hour.As many as 35, 81,101 devotees took a holy dip in River Godavari on the occasion of Mahapushkaralu in the past four days. On Friday alone, till noon in day, in all ghats of Rajahamundry about 8.65 lakh people took a holy dip. Total number of pilgrims visited the pushkaralu is 916123 while this after between 1pm and 3 pm as many as 66,907 pilgrims arrived in the town. 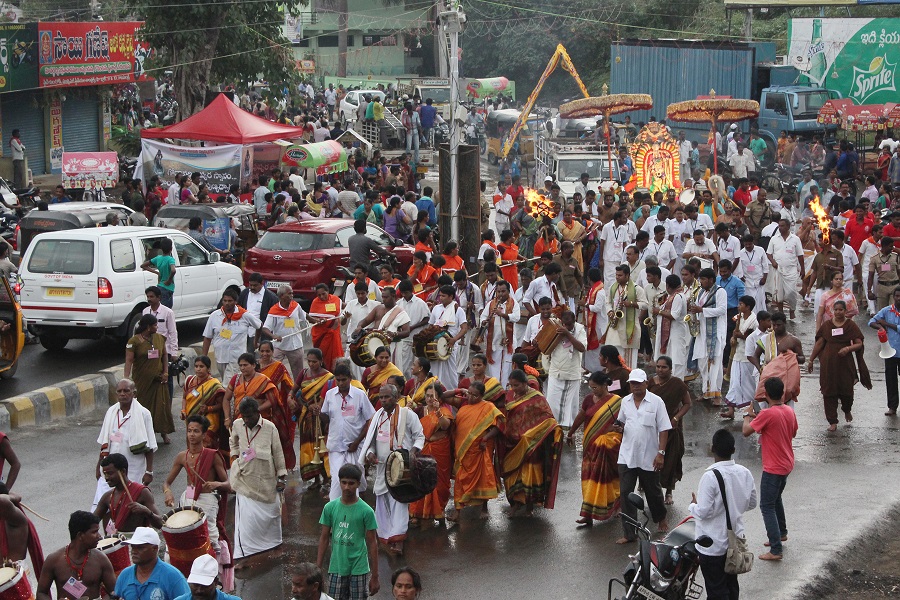 Please click on above images to view them in Full Size 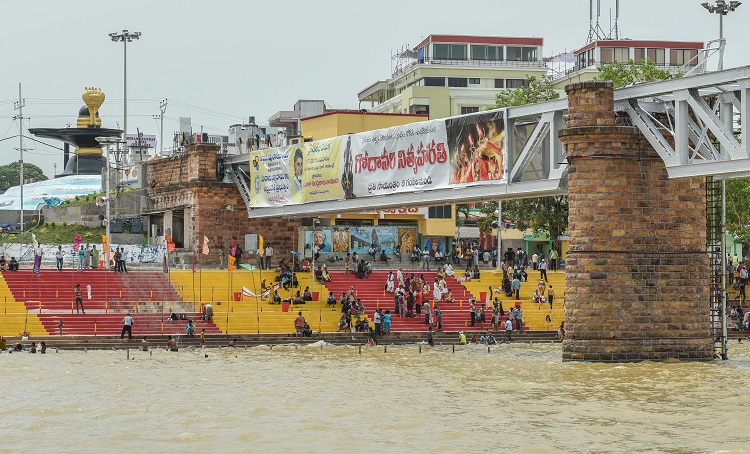