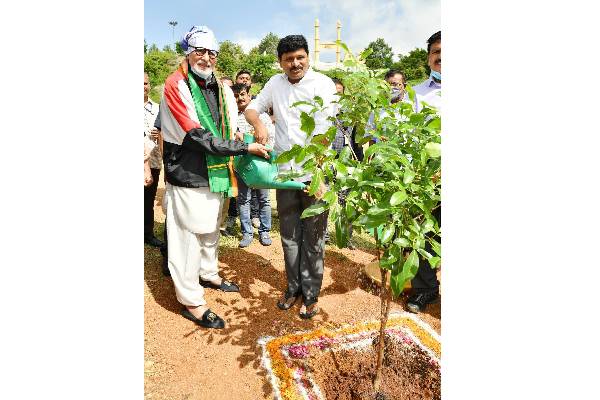 India’s Superstar and legendary actor Shri Amitabh Bachchan planted saplings along with Rajya Sabha MP and Founder of Green India Challenge, Shri Joginipally Santosh Kumar, at Ramoji Film city, here on July 27. The Padma Vibhushan awardee lauded the efforts of Green India Challenge in expanding the green cover across Telangana and the country.
Amitabh Bachchan enquired keenly about the Green India Challenge, on what inspired to take up this initiative, how plants are cared, tended even after years of plantation and expressed his happiness at the results. “I am surprised to know that GIC is able to plant 3 crore saplings recently on the occasion of Minister for Municipal Administration & Urban Development, Industries & Commerce, and Information Technology of Telangana, KTR’s birthday. It was certainly a mammoth task, and I am in awe of their dedication and commitment towards the environment,” he said.
The Superstar also congratulated GIC for entering into Guinness Book of World Records with a massive plantation of 2 crore seed balls within an hour. Talking to media he said, “I have always been aware of Green India Challenge but taking part in this is a great privilege. I wish very best to Shri Joginipally Santosh Kumar in taking this great work forward.”
Incidentally, July 27 is also the death anniversary of India’s greatest scientist and former President Shri APJ Abdul Kalam and on many occasions, Shri Joginipally Santosh Kumar mentioned how he inspired him to take up this challenge and do his bit for the environment.
Shri Amitabh Bachchan opined that a noble and great initiative like Green India Challenge requires great participation from across the world and said that he would challenge 3 more people to take part in the same from his twitter handle.
Telugu superstar Nagarjuna too took part in the programme and planted a sapling along with Producer Shri Ashwini Dutt, Ramoji Film City MD Vijayeeswari. 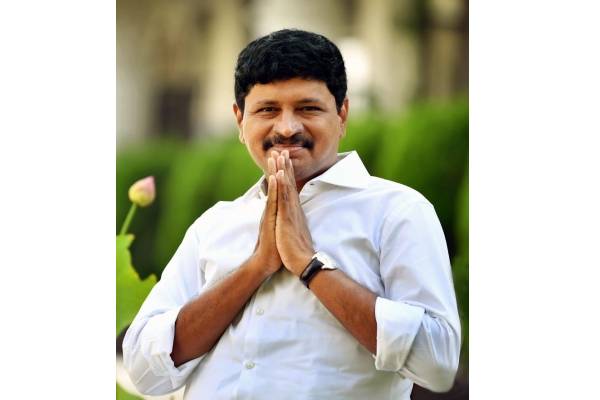 Planting saplings on birthdays by politicians and celebrities in Telangana seems to have become the new fashion these days.

Their followers and fans also prefer to do something meaningful by presenting them saplings instead of bouquets or garlands.

Green India Challenge, an initiative of Member of Parliament J. Santosh Kumar, is credited with bringing this change.

The Rajya Sabha member’s Twitter timeline is flooded with pictures of political leaders, actors, sportspersons and other eminent people planting saplings to celebrate their birthdays by accepting his Green India Challenge (GIC).

While greeting other MPs, ministers, legislators, leaders and celebrities on their birthdays, the MP belonging to Telangana Rashtra Samithi (TRS) urge them to plant a few saplings to mark the occasion. They respond by posting photographs clicked while planting the saplings.

“Hope you would plant few saplings to mark the special day of your life and see that your followers to do the same in order to achieve the dream of our CM KCR Sir’s HarithaTelangana,” Santosh Kumar tweeted tagging K. Prabhakar Reddy, the MP from Medak on his birthday on June 6.

Though looks symbolic, this initiative has helped in bringing a silent transformation. The MP’s passion about GIC and his continuous efforts to rope in top celebrities have helped the cause and so far led to planting of more than 10 crore trees in Telangana and other parts of the country.

It was on July 17, 2018 that Santosh Kumar launched GIC with the slogan ‘Hara Hai Toh Bhara Hai’ (If it is green, it is complete). “I was inspired by our Chief Minister’s Haritha Haram programme which is aimed at improving the green cover,” he said.

Started in 2015, Haritha Haram is one of the world’s largest plantation programme with an aim to increase the forest cover in the state from 24 per cent to 33 per cent. Every year, crores of saplings are being planted across the state under Haritha Haram, a brainchild of Chief Minister K. Chandrasekhar Rao, popularly known as KCR.

“Haritha Haram is a testimony of KCR garu’s vision for the overall development state and its citizens. The logic behind is simple. The thick, dense forest cover ensures timely arrival of seasons, rains, which in turn increases the agricultural productivity, reduces environmental pollution, instills healthy living and the list of benefits goes on,” says Santosh, a relative of the chief minister.

Keen to do his bit in promoting green cover, the MP came with the idea of GIC, inviting people from all walks of life to plant saplings.

Going beyond the symbolic gesture, Santosh Kumar adopted 2,042 acres of Keesara Reserve Forest on the occasion of state minister and TRS Working President K. T. Rama Rao’s birthday. This was in response to ‘Gift a smile challenge’ of Rama Rao, who wanted his supporters to do something meaningful for the society on his birthday. It is believed to be the first instance of an individual adopting a forest for its protection.

This idea of adopting and pledging care for reserve forests motivated others. Actor Prabhas of ‘Baahubali’ fame came forward for protection and development of 1,650 acres of Kazipally Reserve Forest on the outskirts of Hyderabad.

The actor gave Rs 2 crore to the forest department for the purpose.

Santosh’s call to industrialists to come forward to participate in the green movement also started evoking good response. Hetero Pharma agreed to shield the greenery and life in 2,543 acres of Mumbapur-Nallavelli Reserve Forest.

On the Chief Minister’s birthday on February 17, the MP gave a call for ‘Koti Vrukshaarchana’ or planting of 1 crore saplings.

He appealed to everyone to plant at least three saplings wherever possible.

“This idea was instantly liked and lapped up. I spoke to various individuals, professionals, employed, self-employed including public representatives both at central and state levels and it became a hit in a jiffy,” he said.

Last month, Prime Minister Narendra Modi lauded the Santosh Kumar’s initiative. In a letter to the MP, Modi congratulated him for undertaking ‘this noble initiative to preserve a cleaner, greener environment.’

The MP recently brought out the book ‘Vruksha Vedam’ which has the shlokas highlighting the importance of trees and forests as depicted in the Indian literature. It also explains the importance, medicinal and therapeutic properties of various plants, trees as mentioned in vedas for creating awareness among the general public.

GIC representatives Raghava and Karunakar Reddy say the GIC is for everyone. Anybody can plant 3 saplings in his/her house, park, balcony or any other place and WhatsApp selfie pictures to 9000365000. He will receive a message to download an App, where he can upload selgies. GIC also post the images its social media pages. 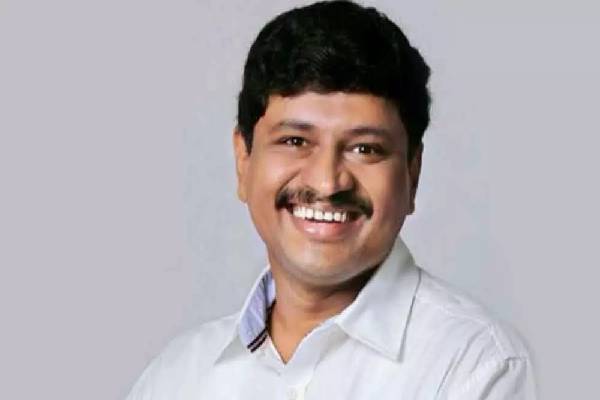 One more from TRS chief and Telangana CM K Chandrasekhar Rao’s family was tested postive for corona on Thursday (today).

KCR’s nephew and Rajya Sabha member Joginapally Santosh Kumar, who takes care of KCR round the clock, was tested positive.

He tweeted, “Unfortunately, tested positive for Covid. Thanks for the enquiries about my health. Have no symptoms as of now. Under the supervision of the doctors.(sic)”.

Santosh has been taking care of KCR at his farmhouse ever since KCR tested positive on April 19 and remained in home isolation.

Santosh accompanied KCR to Yashoda Hospital yesterday when he came there to undergo medical tests and CT scan.

It is believed that Santosh might have infected virus from KCR.