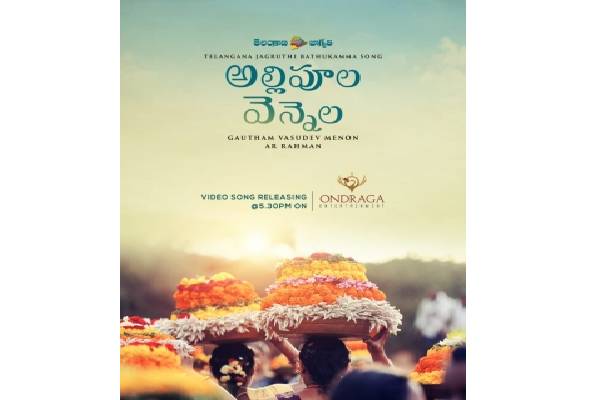 Music maestro A R Rahman and filmmaker Gautham Vasudev Menon have joined hands to compose a song for the Bathukamma festival.

Kavitha, a former MP and daughter of Telangana Chief Minister K. Chandrasekhar Rao, has brought together stalwarts for a special Bathukamma song.

The song has been composed by Academy Award winner A R Rahman, sung by Uthara Unnikrishnan, penned by Mittapalli Surender, and choreographed by national award winner Brinda.

The song shot in the districts of Telangana was released ahead of Bathukamma, the floral festival of Telangana. The nine-day long festival is set to begin on October 6.

Women sing and dance around specially arranged flowers during the folk festival. Ever since the formation of Telangana State in 2014, Bathukamma is being celebrated as the state festival.

Telangana Jagruthi said in a statement that Bathukamma festival is an integral part of Telangana and it identifies with the cultural identity of the people from the state across the globe.

Telangana Jagruthi played a crucial role in strengthening the roots of the Telangana movement by focusing on promotion of Telangana’s unique culture. The organisation has been an active force that represents the cultural and literary landscapes of Telangana not just in India but globally.

The song has added to the festive atmosphere in Telangana and has given especially the women of Telangana, another reason to enjoy a colourful and joyous Bathukamma festival.

Rahman took to Twitter to extend Bathukamma greetings in Telugu. “A festival of life. A celebration of togetherness. Bringing you a glimpse of the beauty of Bathukamma through “#AllipoolaVennela” along with Telangana Jagruthi”,” he tweeted.

Kavitha replied to the tweet. “The festival of colours, melody and togetherness Bathukamma is here! Here’s sharing a glimpse of the special song for Bathukamma by @arrahman @menongautham and a dream team for all my sisters.”