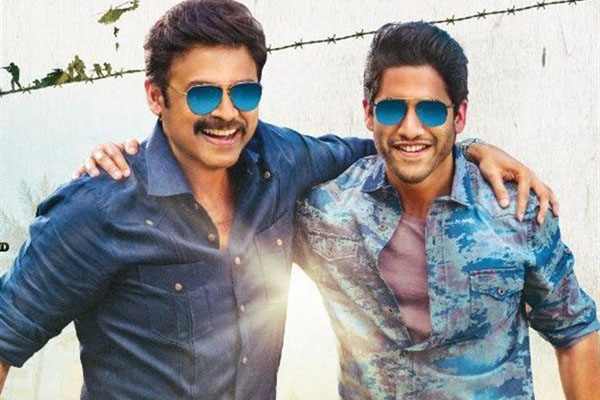 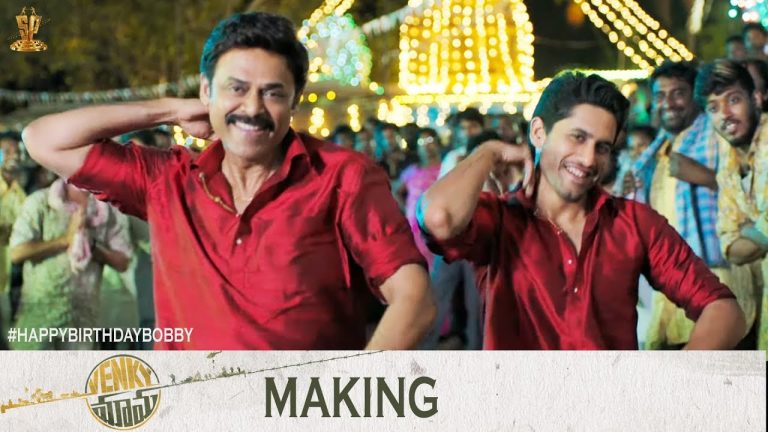 The vivacious star Victory Venkatesh has been choosing interesting roles which involves comedy, fun and lot of performance antics off late. His recent flick F2 which released earlier this year was a massive hit. He teamed up with younger actor Varun Tej and tickled the funny bone. Now the hero is teaming up with his nephew Naga Chaitanya for a fun film Venky Mama directed by Bobby.

On the eve of Bobby’s birthday, the makers released a pre teaser which showed Venky and Naga Chaitanya in a single frame. Though Venky appeared for brief in Chaitu’s earlier film Premam, the appearance was limited. This on the other hand looks quite promising and the vibes are extremely positive for sure!

Venky has surely understood the knack of multi-starrers and extracting the full potential out of it.

Akkineni Naga Chaitanya and Rashi Khanna are paired for upcoming multi-starrer film Venky Mama which also features Victory Venkatesh and Payal Rajput as other leads. The principal shooting of this family entertainer is happening at a brisk pace in Hyderabad and the makers are fast wrapping up important scenes on the lead pairs.

Rashi Khanna shared a beautiful on-location click of her with Naga Chaitanya during the shoot breaks. The duo is all smiles in the picture and make up for a good on-screen pair. This is the first time they are sharing screen space and the chemistry between is expected to a major highlight for the film. Chaitu is sporting a clean shave in this picture and Rashi Khanna is dazzling in glamorous avatar.

Directed by Bobby, Venky Mama has an interesting backdrop as Venkatesh is playing a military officer in it. Naga Chaitanya’s role is kept under wraps. Suresh Babu is bankrolling the film. 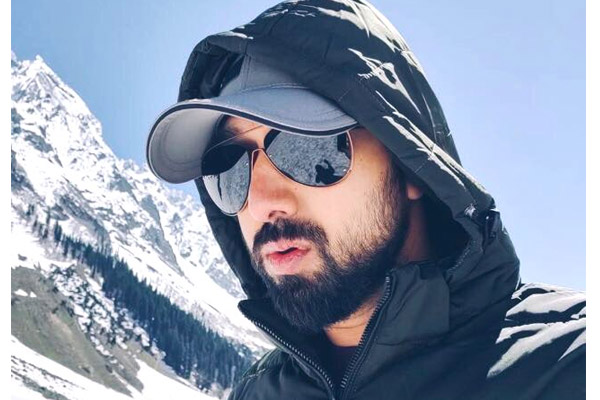 After wrapping up two hectic schedules, the team of Venky Mama is now ready to shoot in challenging conditions of Indian borders in Kashmir. Reportedly, one of the two protagonists will be seen as an army officer in the film. So, director Bobby is currently scouting locations to shoot some of the crucial episodes in the border. Venkatesh and Chaitu will be seen as Mama – Alludu and the film is expected to be high on entertainment with an interesting back story.

SS Thaman is rendering the soundtrack and Suresh Babu is producing the film. 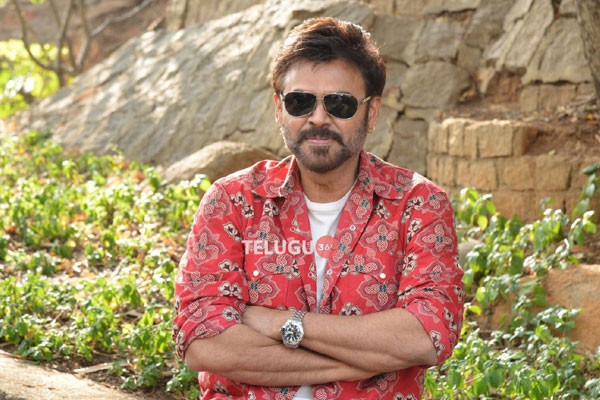 A gossip portal speculated news couple of days ago that Victory Venkatesh and Nara Rohit are on board for the remake of Tamil cult classic Vikram Vedha. It was revealed that mass director VV Vinayak is on board to direct the project and the pre-production work is currently on. Venky’s brother and producer Suresh Babu responded today saying that there is no truth in the news.

The statement said that Venkatesh is completely focused on Venky Mama and his next project will be announced officially soon. The shoot of Venky Mama is happening in Hyderabad and Venkatesh, Naga Chaitanya are the lead actors. Bobby is the director and Payal Rajput, Rashi Khanna are the heroines. The film releases for Dasara 2019.

There is no truth in reports doing rounds in media that #VenkateshDaggubati garu is doing ‘Vikram Vedha’ Telugu remake. He is currently busy filming for #VenkyMama. The next films will be announced shortly. 😊 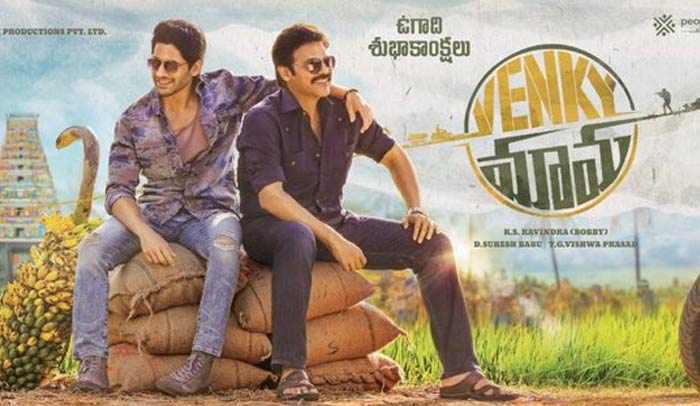 Seasoned actor Victory Venkatesh and Naga Chaitanya teamed up with director Bobby for a multi-starrer titled as Venky Mama. The principal shooting commenced in Rajahmundry last month and the team has already wrapped up a lengthy schedule in which key scenes featuring the lead roles were shot. It is speculated that one of the lead actors will be seen as a military officer in the film.

Now, another interesting buzz that is making rounds in industry circles is that the story of Venky Mama has a lot of drama and emotions besides entertainment. Currently, a massive episode involving hundreds of artists taking part in a political campaign is being shot in Ramoji Film City. Venky and Chaitu are shooting for this crucial sequence. Sources revealed that there is an interesting political backdrop in the film which unfolds at a crucial juncture.

Venky Mama team has a shock for Rakul Preet Singh 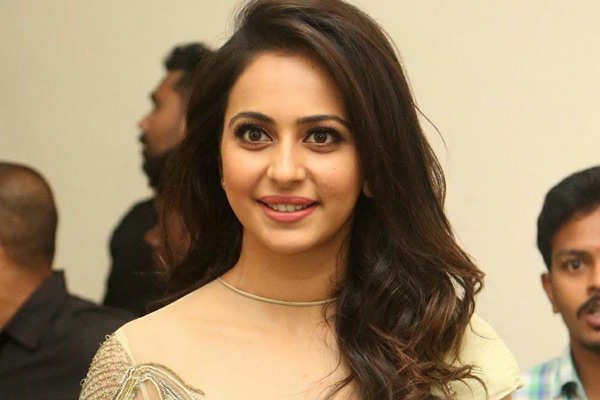 Venky Mama was announced long ago and had its official launch during Dasara last year but the regular shoot did not commence as the team is fine-tuning the script. Venkatesh and Naga Chaitanya are the lead actors while Rakul Preet Singh is on board to romance Chaitu in this comic entertainer. With the shoot of the film delayed, Rakul was knocked by an interesting opportunity and she signed the film which left Venky Mama team in shock.

Rakul has been roped in for a crucial role in Nagarjuna’s Manmadhudu 2 and romancing Nag’s son Naga Chaitanya would not make sense in Venky Mama. Hence the makers of Venky Mama auditioned and locked young actress Nabha Natesh for the role. Payal Rajput is the other lead actress in the film that started rolling recently. Bobby is the director and Suresh Productions, People Media Factory are the producers. Venky Mama releases during Dasara. 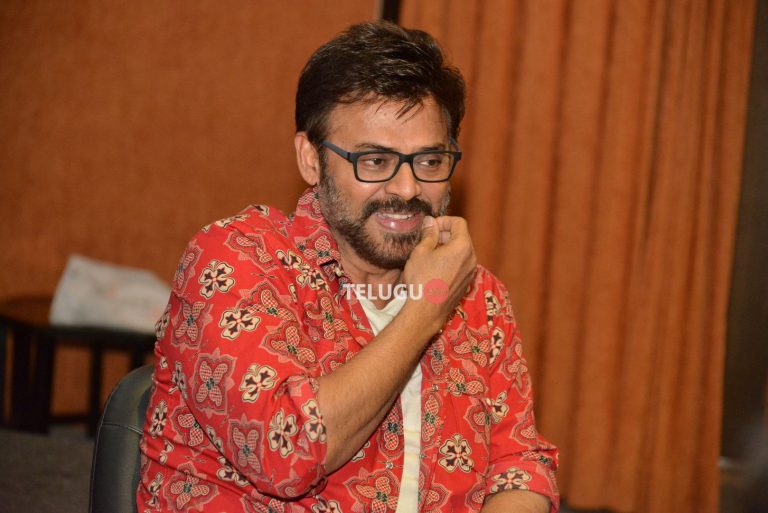 Buoyed by the stupendous success of F2, seasoned actor Victory Venkatesh commenced shooting for his next multi-starrer which is titled as Venky Mama. KS Ravindra aka Bobby of Jai Lava Kusa fame is calling shots for this comedy caper which also features Naga Chaitanya as another lead actor.

The film started rolling today in Rajahmundry and Venkatesh has joined the sets to shoot for his role. Venky Mama is going to be a fun ride with good dose of emotions. Venkatesh’s character is going be the driving factor for the story and he is expected to dominate the screen just like he did in F2. Bobby is making sure that there is ample scope for entertainment which appeals to family audience very well.

Naga Chaitanya will join the sets once he wraps up his upcoming film Majili. Venky Mama also stars Payal Rajput and Rakul Preet Singh as female leads. Suresh Babu is the film’s producer. 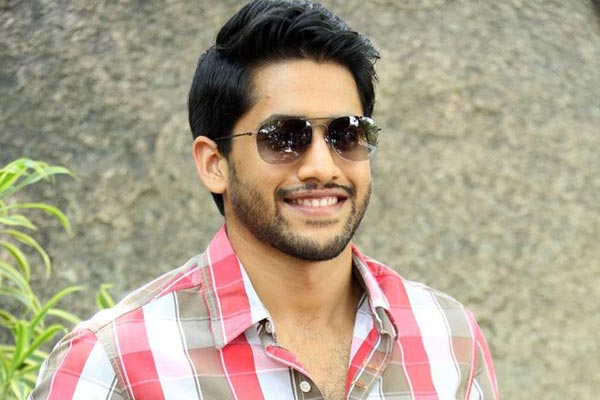 Venky Mama, the much-awaited multi-starrer featuring Daggubati Venkatesh and his nephew Akkineni Naga Chaitanya is gearing up for its first schedule in Rajahmundry from February 22. Jai Lava Kusa fame Bobby is the director and noted writer Kona Venkat is penning dialogues for this family entertainer.

Meanwhile, an exclusive update is that Chay will be seen in an army officer role in this film. Incidentally, Chay’s ongoing emotional love story, Majili also has a few crucial scenes narrated in a similar army backdrop. 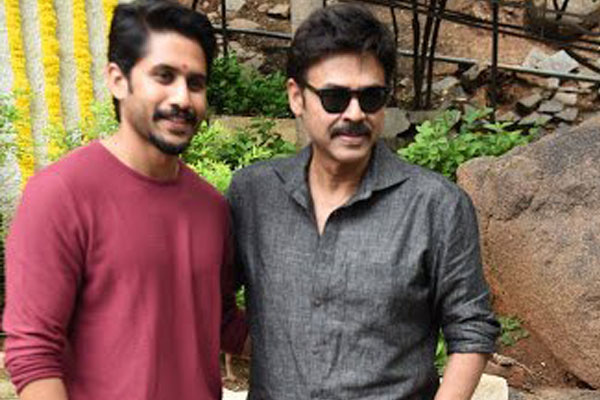 Victory Venkatesh and his nephew Naga Chaitanya are joining hands for the first time for a mass entertainer titled Venky Mama. KS Ravindra (Bobby) is the director and the film’s official launch took place last year. The regular shoot got delayed after the film’s producer Suresh Babu isn’t happy with the final script. Now the entire script of the film got locked and the regular shoot will commence from February 21st in Hyderabad.

The makers of Venky Mama are keen on releasing the film during Dasara. As of now Megastar Chiranjeevi’s periodic film Syeraa will release for Dasara. Shriya Saran and Rakul Preet Singh are the leading ladies in Venky Mama that will be produced by Suresh Productions and People Media Factory banners. Venky is riding high with the success of F2 while Naga Chaitanya is busy with the shoot of Majili. 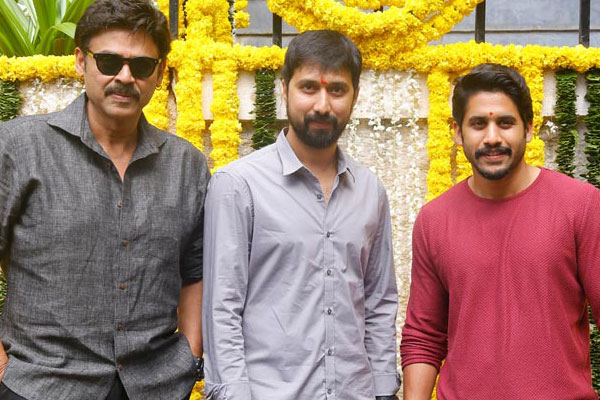 Victory Venkatesh and Naga Chaitanya are teaming up for the first time for a mass entertainer titled Venky Mama. KS Ravindra (Bobby) is the director and the film has been launched officially during October. The regular shoot is yet to commence and it has been delayed several times as Suresh Babu is not happy with the final draft. Bobby is left shattered with Suresh Babu’s too much involvement and is in plans to walk out of the project.

The film’s director has been changed once and now Bobby too is in plans to quit the film if it doesn’t start from January 2019. On the other side Venky wrapped up F2 shoot and is waiting to join the sets of Venky Mama. Chaitu during this delay shifted his focus on Shiva Nirvana’s Majili. We have to wait to see if Suresh Babu gives his nod or turns speed breaker for Venky Mama.

Victory Venkatesh and his nephew Naga Chaitanya are teaming up for the first time in their career for a commercial film titled Venky Mama. KS Ravindra (Bobby) is the director and the regular shoot commences from November 12th. Venky Mama’s basic plot revolves around astrology and its impact on human life. Venky Mama is all about the conflict between Venky and Chaitu that triggers because of astrology.

Huma Qureshi and Rakul Preet Singh have been roped in to romance the lead actors in Venky Mama which even has enough dose of entertainment throughout. Suresh Productions, People Media Factory and Kona Film Corporation will produce Venky Mama which will has been aimed for summer 2019 release.

Victory Venkatesh and his nephew Naga Chaitanya are teaming up for a comic entertainer which has been launched officially recently. Bobby will direct this film which has been tentatively titled Venky Mama. The regular shoot of this comic entertainer will commence from August 8th in Hyderabad. Bobby wanted Devi Sri Prasad to compose the tunes for the film but DSP’s packed schedules and the whopping remuneration made the makers re-think about the composer.

Young music sensation SS Thaman has been finalized to compose the tunes for Venky Mama. Thaman will start working for the film soon. While Rakul Preet Singh has been finalized to romance Chaitanya, the other female lead is yet to be finalized. People Media Factory, Kona Film Corporation and Suresh Productions will jointly produce the film. The makers are keen on releasing Venky Mama during the first half of 2019. 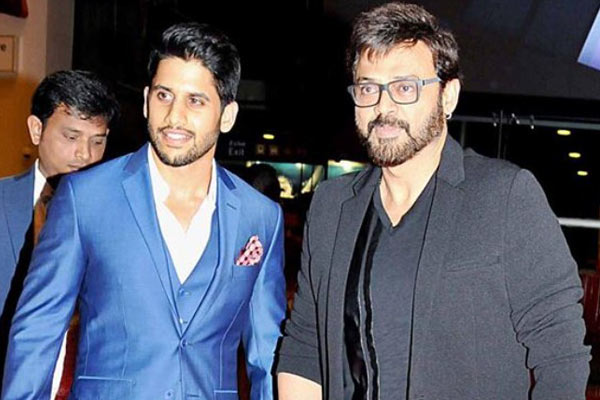 Telugu360 was the first to break news regarding the Akkineni – Daggubhati multi-starrer film few months ago. Young director Bobby is going to wield the megaphone for this crazy multi-starrer which is going to start rolling in July.

The latest update reveals that the film has been titled as Venky Mama. Both Venky and Chay will be seen as Mama and Alludu in this film which is tipped to be an out-and-out comedy caper. The regular shooting will commence in Karaikudi once the pre production is done and dusted.

Huma Qureshi and Rakul Preet Singh are in talks for the female leads. Suresh Babu and Kona Venkat will jointly bankroll this film.