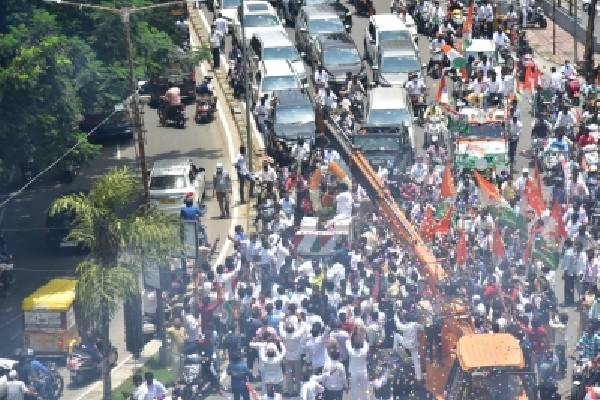 Hyderabad police have booked a case against the Congress’ Telangana chief Revanth Reddy and other party leaders for taking out a rally without permission on Wednesday.

The rally was organised on the occasion of Reddy taking charge at the Gandhi Bhavan, the party headquarters.

Reddy had taken out a rally with his supporters after offering prayers at Peddamma temple in Jubilee Hills and had reached Gandhi Bhavan after passing through several busy areas including Nampally where he stopped to offer prayers at the Dargah Yousufain.

The Begum Bazar police booked a a case against Reddy, also a member of Parliament from Malkajgiri and state Congress Working President Anjan Kumar Yadav and others.

The event was marked by grand celebration by the party. Leaders from various parts of the state had descended on Gandhi Bhavan, where a public meeting was also organised.

The Congress leaders were booked under various sections of the Indian Penal Code (IPC), including unlawful assembly and public nuisance. The leaders were also booked for violations of the Disaster Management Act as Covid protocol was not followed, a police officer said.