The Telangana High Court on Monday directed the KCR government to halt the demolition of the old Secretariat building in Saifabad until further notice.

Hearing a petition filed by retired professor P L Visheshwar Rao, the High Court directed the Telangana government to stop the demolition works till July 15. Further, the court has asked the state government to submit a report in a sealed cover on the Cabinet decision to demolish the old Secretariat building.

On its part, the AG had submitted all the required clearances and permissions it had received from different sanctioning authorities to demolish the building.

The petitioner, through his counsel, submitted to the court that he will file a counter to the government’s arguments. The court has posted the next hearing on the issue to July 15.

On July, 10, the High Court put brakes to the demolition of the old Secretariat building. The petitioner had earlier argued that the building was being demolished in violation of Covid-19 regulations.

Hearing the petitioner, the HC had directed the state government to stop all demolition works until further notice and asked the government to submit a report on what safety measures were initiated while carrying out the demolition activity.

Already, 60 percent of the old Secretariat building, spread over 25.5 acres with 10 blocks, which began in the early hours of June 7 had been razed to the ground.

Almost all the 10 blocks of the building had already been razed to ground, including the Saifabad Palace which was built in 1888 in European style by Mir Osman Ali Khan, seventh Nizam and the last ruler of erstwhile Hyderabad State. The Saifabad Palace once the seat of Nizam’s Prime Minister till Hyderabad”s accession with the Indian Union in 1948.

The G-Block, also known as Sarvahitha from where N T Rama Rao discharged his duties as chief minister was also demolished. The C-Block and the H Block which served as the offices of former CMs Marri Channa Reddy and Chandrababu Naidu respectively were razed to the ground.

Jagan realigns express highway to benefit Pulivendula at the cost of Amaravathi!

Jagan blocks but people give place to Amaravathi JAC to hold public rally! 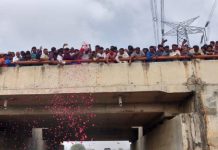