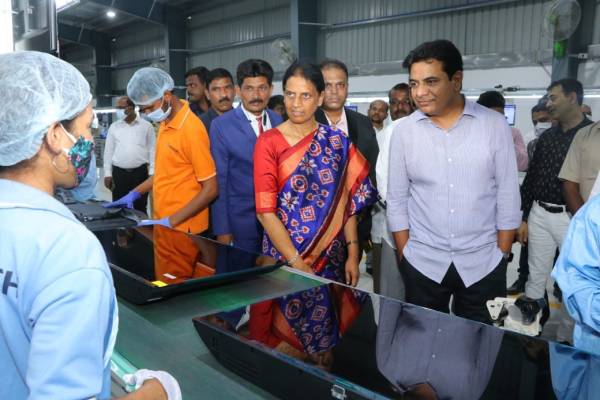 He said the state aimed to achieve revenue generation of 2.5 lakh crore and 16 lakh new jobs in the electronics manufacturing sector in the next 10 years.

He was speaking at the inauguration of a new unit of Radiant Appliances & Electronics at E-City, Ravirayala in Hyderabad.

He said the state has two Electronic Manufacturing Clusters (EMCs) at Ravirayala and Maheswaram while two more EMCs are being set up. To expand the sector outside Hyderabad, land parcels are being identified in districts.

KTR, as the minister is popularly known, claimed that the state has all what is required for the growth of the sector and its expansion can provide employment to thousands of people as even those who passed 10th class, intermediate or done ITI can get the jobs.

In the last seven years, the state has added more than one lakh employees in the electronic manufacturing sector.

At E-City Raviryala, 15,000 people are directly employed in the companies which have come here and within a year this number will go up to 40,000.

The new plant will increase the annual capacity of the company from 25 lakh to 45 lakh unit. The new plant has been set up with an investment of Rs 100 crore, and will create additional employment for 1,000 people.

Raminder Singh said the company’s revenues grew by 35 times in seven years and this was possible due to the pro-business environment in Telangana and uninterrupted electricity supply.

“Uninterrupted power supply is important. Power cuts and reliability on generators lead to inefficiency and defective products. In Telangana we ensure that uninterrupted power is given to not only industry but to households and also to the farming community,” KTR said.

He said there was an all-round growth in software, hardware, other manufacturing and electronics sectors.

He pointed out that the state has no problems with electricity, drinking water, skilled workforce, training and skilling institutes. There is a favourable environment for business with able leadership and stable government.