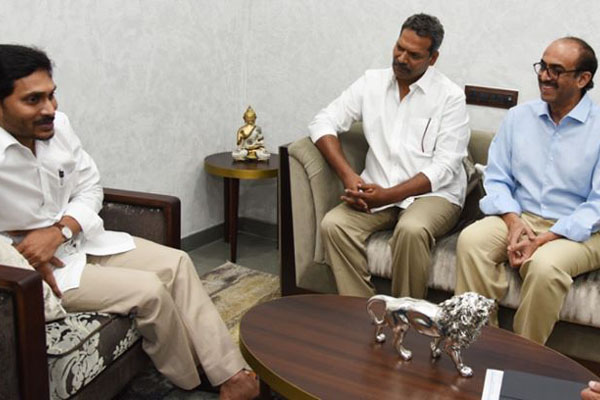 Though Jagan became CM of AP in May 2019, no top personalities bothered to meet him or greet him.

Only megastar Chiranjeevi met him once.

Chiranjeevi too did not met Jagan soon after Jagan became CM to wish or greet him.

He met him only once, that too to invite him to watch special premiere of his movie “Sye Raa”.

Jagan did not attend the premier.

However, on Wednesday, big producers from Tollywood, D Suresh Babu, Nallamalupu Bujji, Shyamprasad Reddy and few other called on Jagan all of a sudden in Vijayawada.

This naturally triggered speculations over what prompted big producers to call on Jagan all of a sudden.

Is it to discuss plans with Jagan to develop Tollywood industry in Vizag on par with Hyderabad?

But sources said no such discussion took place.

They met Jagan only to invite him to inaugurate the housing complex built by film industry by collecting donations from various quarters for the benefit of Hudhud cyclone victims of 2015.