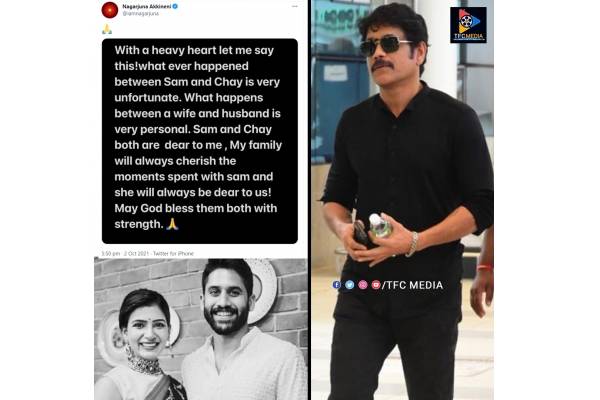 The couple, popularly known as Chay-Sam, confirmed the news in an official statement from Naga Chaitanya, shared by Samantha, which they released on Saturday. They requested their fans and media to allow them privacy.

Nagarjuna reacted to the development with a sweet parting note. Taking to social media, the superstar said: “With a heavy heart let me say this! Whatever happened between Sam and Chay is very unfortunate. What happens between a wife and husband is very personal. Sam and Chay are both dear to me. My family will always cherish the moments spent with Sam and she will always be dear to us. May God bless them both.”

Earlier in the day, in a statement addressed to “our well-wishers”, Chaitanya said: “After much deliberation and thought, Sam and I have decided to part ways as husband and wife to pursue our own paths. We are fortunate to have a friendship of over a decade that was the very core of our relationship which we believe will always hold a special bond between us.”

Chaitanya added in the shared statement: “We request our fans, well-wishers and the media to support us during this difficult time and give us the privacy we need to move on. Thanking you for your support.”

The buzz about the marriage disintegrating had intensified last month after Samantha dropped ‘Akkineni’ from her name on her Twitter account, but neither addressed the rumours head-on. Samantha and Naga Chaitanya got married in Goa in 2017.