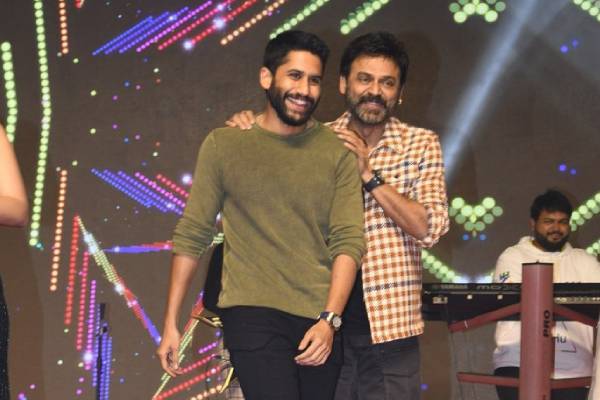 Never seen before kind of promotional campaign is happening for Venky Mama as the film is very prestigious for Suresh Babu who’s making his father Ramanaidu’s dream coming true by making a multi-starrer with his family heroes- Venkatesh and Naga Chaitanya.

K Raghavendra Rao who shares great rapport with Ramanaidu’s family has recalled his emotional journey with the legendary filmmaker and his family members.

Suresh Babu thanked Raghavendra Rao saying his family will always be indebted for giving several massive hits because of which they could survive all these years.

Bobby assured fans that it will be best birthday gift for Venkatesh. He recalled the day he went to attend an audition for Gangotri and gave the reason why he decided the same day never to act in films.

Rana said that his grandpa would’ve felt happy had he watched the film given that it was his dream for a multi-starrer from the family. He then proposed the possibility of a film- Venky Babai to his father Suresh Babu.

Naga Chaitanya thanked one and all for the overwhelming response for the film’s trailer. Praising his uncle, Chay said, “Venky Mama, you’re our youth.” He revealed how nervous he was ahead of the film’s release. “The project is our thathayya’s dream. He always wanted us to act together,” said he.

Venkatesh like always felt nervous speaking on the stage. He said that the film is releasing at the right time. “In my 33 years of career, a film is releasing on my birthday for the first time,” affirmed Venky.