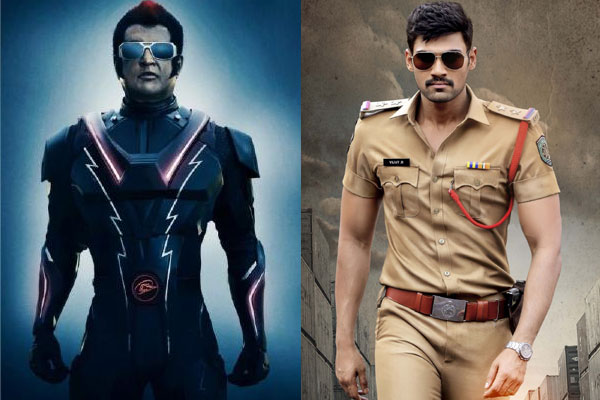 2.0 : The film has a decent weekend in Telugu States with a distributor share of 6 Cr. This has taken the 11 days total to 47.60 Cr. The collections are decent but below the required levels for the film to achieve breakeven mark. Theatrical rights of the film are valued at 72 cr which means a recovery of 65 percent so far. BELOW PAR !

Kavacham : The film has a poor weekend with a domestic distributor share of 4.10 cr. It should have opened at #1 for the weekend being a new release & considering the costs. But the film has fell behind 2.0 which has a lead of 2cr. Theatrical rights of the film are valued at 16 cr which means about 25 percent recovery. The film is a carrying mixed word of mouth and will end up as a DISASTER !

Subramaniapuram : The film has an average weekend with a distributor share of 90 lakhs. it isreleased on advance basis through various distributors and might recover the costs. But the shares are mostly because of percentage basis & the collections are also too low to call it as a Success. AVERAGE !

Taxiwaala : The film continued run in some centres to feed theatres. It has collected about 18.70 distributor share in domestic markets till date. HIT !

Next Enti: The film is an outright disaster with very low collections. This is a hatr-trick disaster for Sundeep Kishan. DISASTER !