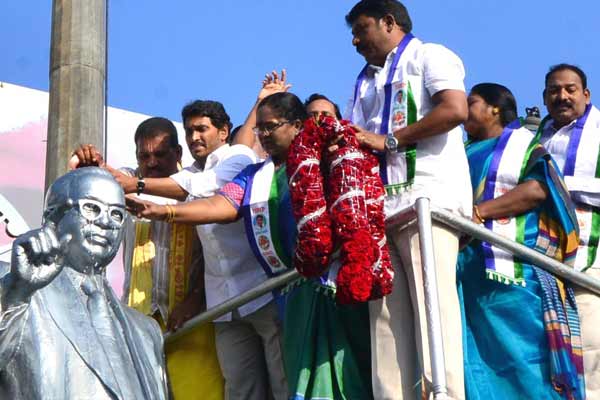 Members of Opposition YSR Congress performed milk bath to the statue of Dr Babasaheb Ambedkar today protesting what it called “insult to the architect of Constitution of India” caused by ruling Telugu Desam party in Assembly.

The MLAs led by Opposition leader YS Jaganmohan Reddy walked in a rally to the Ambedkar Statue near Tank Bund and gave the milk bath.

Addressing media Jagan said it was an act of sacrilege to use Dr Ambedkar 125 birth centenary as a shield to escape from the Call Money cum Sex Racket (CMCSR).He wondered when did CM Naidu come to know of need to pay homage to Dr Ambedkar. “It was only after the second adjournment of the Assembly on Thursday the used the name of Dr Ambedkar. Till two adjournments he did not know that there was need to pay homage. Having seen the gravity of CMCRS crime and its ramifications, Naidu realized the urgency to distract the house attention from the crime. Then suddenly he dragged Ambedkar’s name and suggested that the house take up a discussion,” he said. This was an act sacrilege and the party had to perform the milk bath to apologize for it, he added.
” CMCSR is graver than any other issue lying before the House to taken up. Some leaders of ruling party, with the support from chief minister , MLAs and Ministers, give loan to the women, who are in need, at an exorbitant rate of interest. In case the fail to repay, these money lenders would ask them to trade sex for money. Vijayawada has become insecure for women because of rapacious TDP leaders and CM’s patronage,” Jagan said.

The fight would not be given up until all those involved, including chief minister, were lined up before the people as culprits, he added.