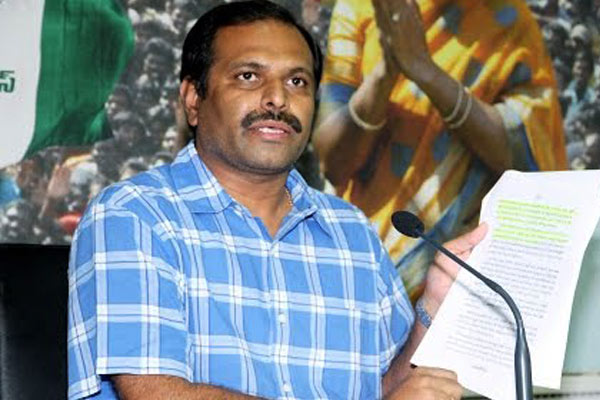 YSR Congress responded strongly to the criticism of chief minister N Chandrababu  Naidu  that some leaders were stopping  his efforts to develop Rayalaseema and said in it was Naidu who stood in the way of region’s development. Coming down heavily on Chandrababu Naidu for his remarks at the Kurnool public meeting today at the foundation laying program for Urdu University, YSR Congress alleged  that the TDP government had no intention of developing Rayalaseema and development had a different meaning for the Chief Minister.

‘The development indicators are not to be seen anywhere near the levels of satisfaction in the state after TDP took over. For the chief minister development means the well-being of his family business and that of his coterie,’ party MLA G Srikanth Reddy said on  Monday.

Brushing aside the remarks that some Rayalaseema local leaders were stalling the development process in Rayalaseema, he said, ‘ it was during the period of YSR that major irrigation projects like Galeru-Nagari, Hundri-Neva have taken shape and have come close to completion. Unfortunately  they are suffering paucity funds now due to Naidu’s step motherly treatment,” he said.

It was during YSR term that faction feuds had come to an end and the region had seen development but the TDP term has always been of apathy, he said and added that Naidu had the habit of  blaming others for his non-performance. ” That was the reason for Chandrababu Naidu’s outbursts and he has to answer in detail the development program taken up by his government,’ he said. He reiterated that YSR Congress demands special status and special package is no match or substitute for it.