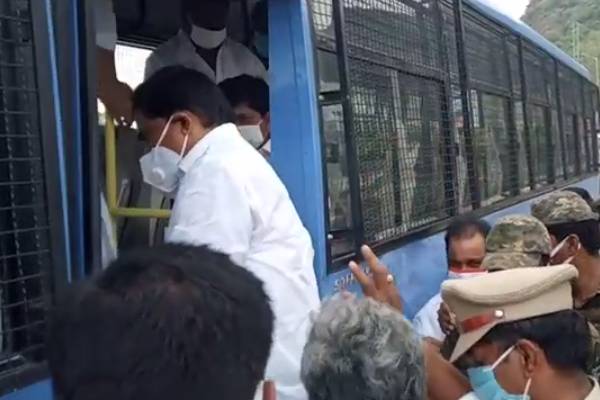 One year after Praja Vedika (people’s grievance cell) was demolished by the Jagan government, the issue continues to rage.

On Thursday, high tension prevailed at Karkatta near Undavalli junction when the police barred five TDP leaders Varla Ramaiah, Devineni Uma, Ashok Babu, Alapati Rajkumar and Bonda Uma who were on their way to reach TDP president and former CM Chandrababu Naidu to attend a party meeting at the latter’s residence.

Praja Vedika was built by the then TDP government as an extension to then Chief Minister Naidu’s residence in 2017. Built at a cost of Rs 9 crore, it was used by Naidu for official purposes as well as to hold party meetings. Praja Vedika was built adjoining the official residence of Naidu and served as the people’s grievance cell in Amaravati. Adjacent to Praja Vedika stands Lingamaneni Guesthouse , Naidu’s bungalow. A year ago, Praja Vedika was razed to ground when Naidu’s family was in Europe.

The demolition of Praja Vedika stands as an example of the YSRCP’s destructive and autocratic rule, said TDP politburo member Varla Ramaiah.

“One year after Praja Vedika was demolished, the Jagan government had failed to remove the building debris. The government should act responsibly and set standards when they are in power. How can we be stopped from meeting our leader at his residence. We are holding a meeting at Naidu garu’s residence. We are being stopped from going to our leader’s residence only to stop us from holding a peaceful meeting. This is police rajyam, Raja Reddy Rajyam not Rajanna Rajyam, Ramaiah fumed.

Deveneni Uma condemned the government for stopping them from meeting their leader and dubbed the governance as highly authoritarian. “The present government was voted to power to build, not to destroy. Instead of focusing on constructing new buildings, Jagan is razing existing ones. The Praja Vedika demolition stands as a symbol of one year destructive governance of Jagan Mohan Reddy,” Uma lashed out. He asked Jagan whether his own luxurious residential building at Lotus Pond in Hyderabad was a legally constructed one. Was Jagan’s Lotus Pond residence not constructed by filling up part of a big water body in the middle of Hyderabad, he questioned.

Meanwhile, traffic came to a standstill for more than one hour with the police and the TDP leaders entered into an argument. Following this, the police arrested the five leaders.