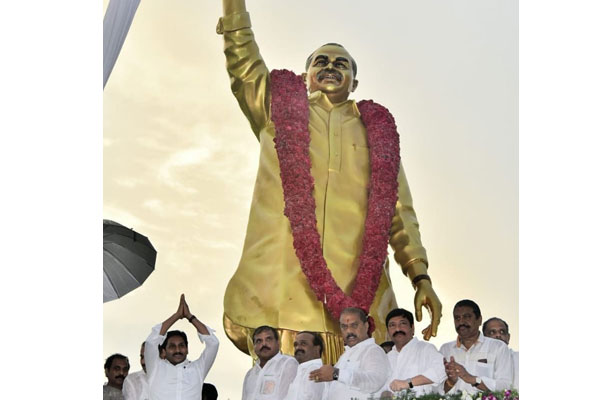 Lot of political controversy surrounded the massive YSR statue since Ex MP Lagadapati Rajagopal got it readied and installed in Vijayawada before 2014 elections. The 12-ft statue dominated skyline between One Town and Two Town at the Police Control Room junction. Later, the TDP government shifted the statue from there and developed a park with novel sculptures made out of metal wastes. The TDP’s decision is subsequently reversed again by the ruling party.

Now, the YCP leaders have got the huge bronze statue re-installed at the same place by removing the sculptures that were put up there. The YCP Vijayawada unit took it up as a matter of prestige. Accordingly, the officials made all necessary arrangements for the safe installation. Lagadapati mobilised funds and spent Rs 30 lakh on the statue at that time.