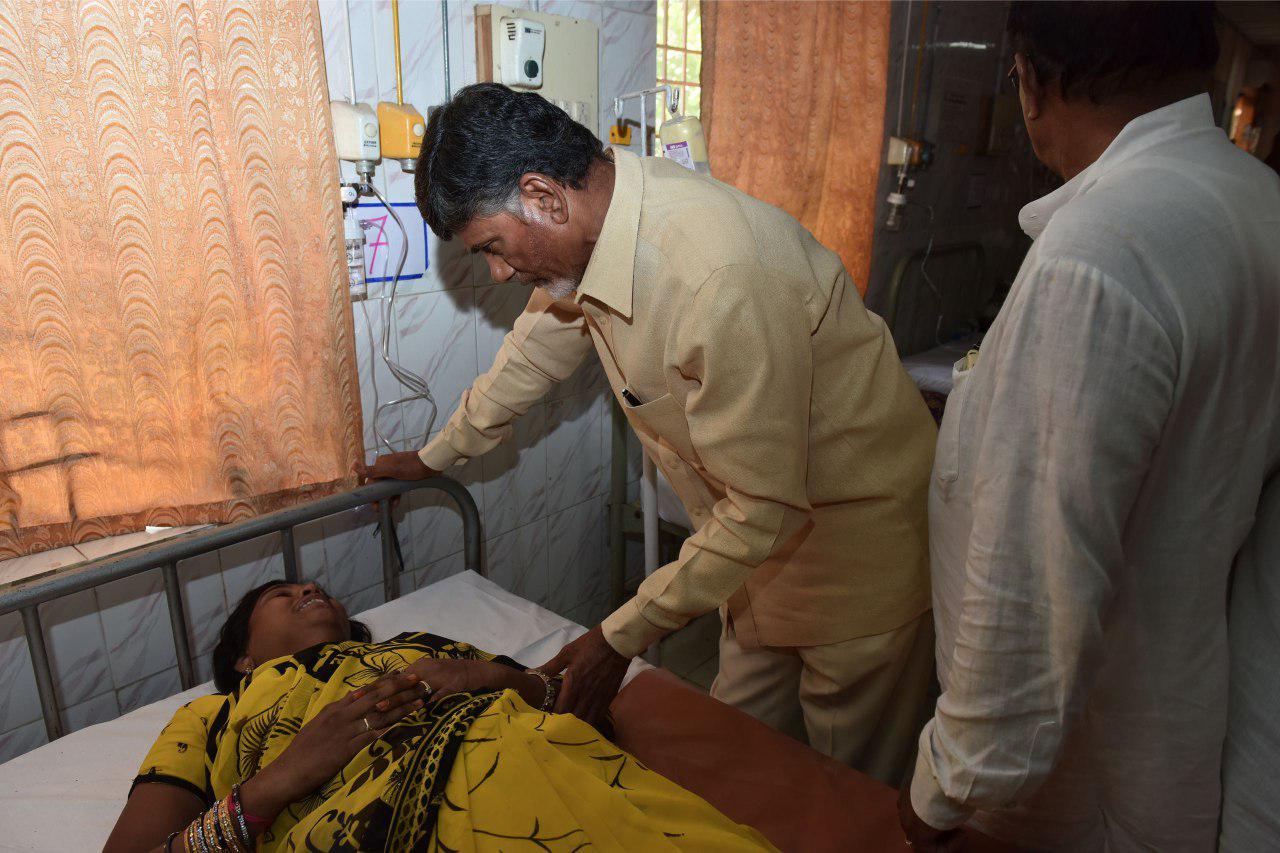 Tragedy struck   Godavari Pushkaralu in Andhra Pradesh. On the first day, as pilgrims thronged the pushkar ghat in Rajahmundry in crowds, stampede took place  resulting in the death of 35 people.  The stampede began at 9.30 in the morning. About 60 injured.

There has been  no announcement of death toll officially from the government.

The tragedy exposed the unpreparedness of the government machinery to meet such an eventuality.  Most of the deceased are women.  According to information reaching Hyderabad, death toll is likely to go up.   This happened at the ghat where  chief minister N Chandrababu Naidu was taking  holy dip. CM has been camping at the Rajahmundry and reviewing the arrangement. After the incident, no minister is daring to visit the stampede venue as they fear attack from the angry pilgrims.

While the stampede created disorder, pilgrims complain the disorder at the ghat had resulted in the stampede. Many complain the toll-free service numbers were out of order. In the melee many children are said to have got lost in the crowds.

People said police had started stopping the pilgrims since 4.30 in the morning because of VVIP presence at the Kotagummam Pushkar ghat, the place of the tragedy.

According to  a visitor, the stampede took place because of VVIP menace. ” To allow chief minister take holy dip in Godavari, security personnel closed all gates in the morning. During the interregnum thousands of pilgrims  reached  and gathered at the venue and found no gate was open to them. After some time, when the CM’s offerings were over, the gates were opened for the public. When the officials opened the first gate, all pilgrims, who gathered there in great number, rushed to enter through first gate  leading to stampede” a  visitor told media.

The incident happened on the steps of the ghat leading to the river. When people ran towards ghat, women got stuck and fell on steps. There were crushed to death, officials said.

“Apparently many devotees who reached after night long travel wanted to take holy dip morning. Buth they were stopped  because of VVIP puja as part of the inauguration of Maha Pushkaralu. Sleepless travel coupled with a long-wait since early in the morning might have caused exhaustion. And in the stampede these women were subjected to suffocation causing their death,” an official told Telugu360.com from Rajahmundry control room.

The bodies and the injured rushed to the hospital with great difficulty.

Situation at the hospital in the city is tense with family members crying inconsolably at sudden death of their dear ones.

Relief commissioner Reddy told Telugu360.com that a woman died while taking dip in river. This, he said, was not related to the stampede.

Chief minister Chandrababu Naidu announced an exgratia of Rs 10 lakh to the family of those who died in the stampede.

Speaking to the media, the CM said the unfortunate incident took place despite every precautionary measure. Tears welled up from his eyes when he was talking to press people.

He said he would stay put in Rajahmundry till the last day of Pushkaralu.

“Maha Pushkaram will take place till July 25. People can take holy dip in any of these 12 days. I request people not to rush to one single ghat” CM asked the people.

Chief minister Naidu urged the pilgrims to observe restraint as the government was trying to take control of the situation. He said the government would come to the aid of the bereaved families. He promised  all medical help to the injured.

He said the stampede  occurred when all the pilgrims tried to enter from same gate  ie gate one.

Naidu himself is overseeing the arrangements of the Pushkaralu. Al the injured have been shifted to Rajahmundry hospital.

The stampede resulted in traffic jam in the city.   The life in the city has gone haywire. According to pilgrims, the road leading from Bommuru to Rajahmundry has witnessed terrible traffic jam since 8.30 in the morning. No cops were seen there around to clear the  vehicles that stuck in the traffic.

Health minister Kamineni Srinvas visited the hospital and inquired about the treatment being given to the injured.

” The pilgrims reached  in unexpected numbers. And all tried to enter the ghat from the gate  resulted in the stampede. The incident was unfortunate,” the minister said.

Prime Minister Narendra Modi expressed pain at the loss of lives due to stampede at Rajahmundry. He Tweeted that he spoke to Naidu and said state government was  working to bring normality.The Prime Minister expressed his condolences to the families of the deceased.

Telangana chief minister K Chandrasekhar Rao expressed shock at the stampede that resulted in the scores of death. He expressed condolences to the  bereaved families.

Opposition leader and YSRC president YS Jagan  left for Rajahmundry from Hyderabad. He expressed shock at the tragedy that struck the Pushkaralu.