To mark the contribution of Overseas Indian community in the development of India, 9 January of every year is marked as the Pravasi Bharatiya Divas (PBD). The conventions started in the year 2003. However, in 2015, the Government of India decided to revise the PDB Convention and as a result, the conventions are now being held once in two years in India. It is certain that Indian Missions and Consulates will celebrate PBD every year.

The PBD commemorates the return of Mahatma Gandhi from South Africa to Bombay on 9 January 1915. The day has become a representation of global migration, achievements and aspirations of the diaspora. The convention provides a platform for the Indian diaspora to engage with the Government of India and apprise themselves about policies, developments and opportunities in the country.

The high spots of the PBD convention are the inaugural address by the Prime Minister and the valedictory address by the President of India. The president will also confer the Pravasi Bharatiya Samman Awards on Overseas Indian for their achievements and contribution both in India and abroad.

The 14th PBD convention is being held from 7th to 9th January in Bangalore International Exhibition Centre (BIEC), Karnataka. For the first time 8000+ delegates from around the world are participating in this year which is highest ever since its inception. Prime Minister of Portugal António Costa who is the first Person of Indian Origin to lead a European country, is the guest of honour for the conference
Both the PMs of Portugal and India in joint declaration said that they would encourage their private sector to undertake joint economic, commercial and industrial projects and investments in third countries to boost growth, jobs and development.

The convention started with ‘Youth PDB’ on 7th January which is a special day long programme providing a platform to connect with Young Overseas Indians and discuss subjects of significance to them. The theme of the Youth PBD this year is ‘Role of Diaspora Youth in the Transformation of India’. Vice President of the Republic of Suriname Michael Ashwin Satyandre Adhin will be the Special Guest at the Youth PBD

PM Narendra Modi & PM of Portugal António Costa inaugurated the of Pravasi Bharatiya Divas Convention on 8th January. The theme of the 14th PBD is ‘Redefining the engagement with the Indian Diaspora’

Narendra Modi’s popularity is not circumscribed to the Indian borders but cuts across borders to much of the 30 million Indian diaspora. Modi considers engagements with overseas Indians as a key area of priority. Known for his one liners, here are a few from the keynote address

The convention is a significant platform for rendezvous of the Central and state governments with the Overseas Indian Community. Since the diaspora may not be able to visit all the Indian states, the state pavilions displaying what each state has to offer have been setup. Chief Ministers of various states have been interacting with the NRIs at the conventions.

The last day of PBD features the valedictory address by the President of India. A unique event this year is that President Pranab Mukherjee released a compilation of Narendra Modi’s Speeches. The book of select speeches of the PM between 2014-15 outlines a new vision of India’s foreign policy and India’s place in the world

In his valedictory speech, President urged that Government of India and NRIs together need to address the concerns of women marrying NRIs. He also spoke about the Government’s flagship initiative ‘Know India Programme’ which helps Indians born abroad to rediscover their heritage & culture.
The President conferred the Pravasi Bharatiya Samman Awards to thirty Overseas Indians for their achievements and contribution both in India and abroad. Forging closer ties US assistant secretary of State Nisha Biswal delivered the acceptance speech on behalf of the Pravasi Bharatiya Samman Awardees. Portugal PM António Costa, the secretary of state for UK Priti Patel, European Parliament Member Neena Gill were among the thirty recipients of the award

PBDs over the years

The PBD Convention will be held once in two years in a city outside Delhi the next PBD will be held in 2019. In the intervening year, smaller, outcome-based PBD Conferences will be organized in New Delhi on issues of concern to the Indian Diaspora. 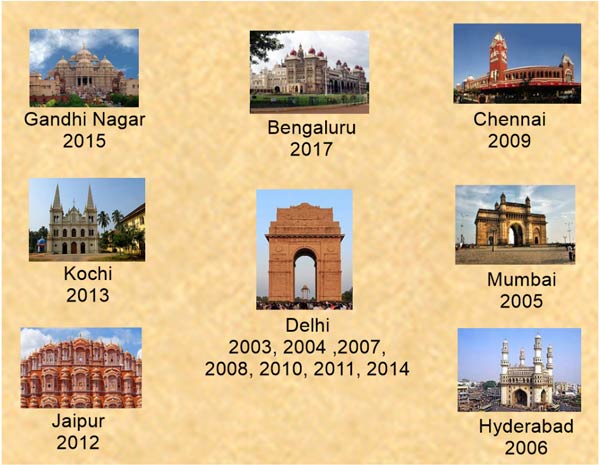